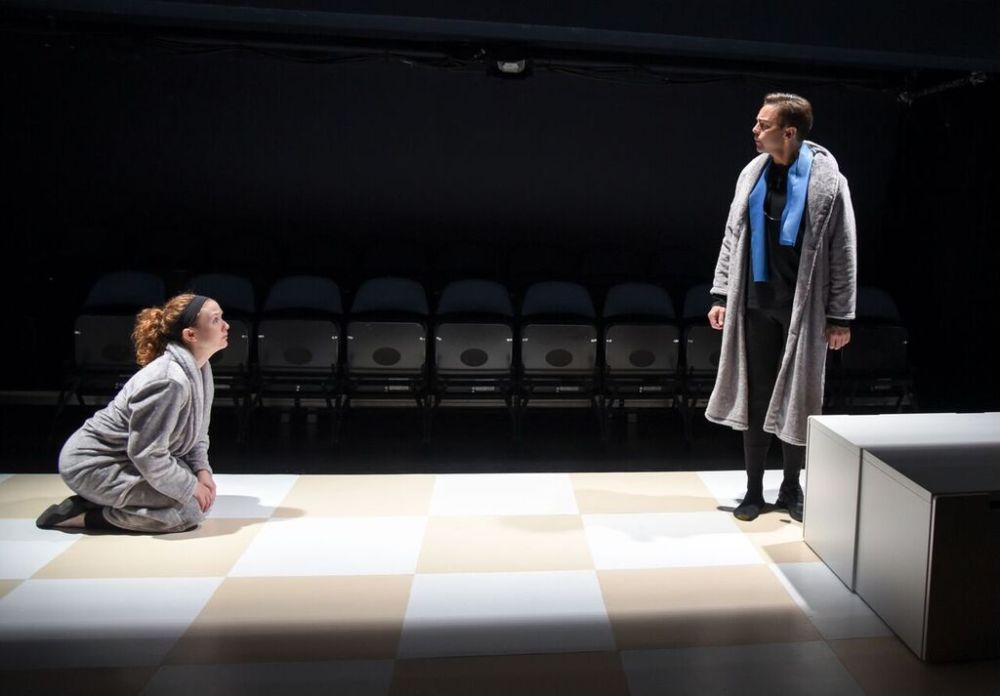 As in a 1950’s sci fi movie, the exclamation point in the title of Stephen Kaliski’s dystopian satire signals the arrival of a frightening new era. This time around, though, the menace of the moment isn’t a swarm of giant insects or a horde of hostile aliens, but the pathogens found in the very food we eat and in the air we breathe. Like all futuristic stories, it’s really a comment on its own time, and GLUTEN! uses hyperbole to highlight the absurdities of our purity-obsessed culture.

Newlyweds Copious Fairchild (Jeremiah Maestas) and Hibiscus Van der Waal (Shawna Cormier) have just moved into the Goldilocks, a state-of-the-art, sterile, “character-free” new home. They subsist on a diet of Goji berries and calming tea, and are required to wear hazmat suits when they go outside. Copious and Hibiscus are trying for a baby, but sex (for that matter touching of any kind) is entirely off limits to this germaphobic generation. Thankfully Copious lives up to his name as he saves his emissions in a jar (in a clever twist, he watches Paula Deen style high-cal cooking shows instead of porn). But  the young couple have barely begun to practice contact-free fertilization when a monkey wrench is thrown into their perfectly ordered world. Copie’s mom Linda (Maggie Low) drops by (gasp!) unannounced. As if that spontaneity weren’t anathema enough, Linda has brought a stranger along. Maple (Roger Manix), is the leader of a new movement, one in which people live as they did before the cataclysmic event known as the Great Correction changed the way people do things. Hibiscus seems curious about the wider world, but Copious is appalled at the prospect of relocating to the wasteland known as The Suburbs. Generational differences heat up and values are called into question– until at last Copious pays attention to his own yen for a more authentic life.

Much of the play’s humor is visual, and the design team rises to the show’s quirky requirements. The hermetically sealed world of the story is neatly evoked by Jason Sherwood’s traverse set design and Jessica Greenberg’s lighting. William Mellette’s costumes highlight the ideological differences between the wooly elders and the puritanical youth.  Matt Sherwin’s sound design gives the Goldilocks a mind and personality that lampoons the increasing role of artificial intelligence in modern life.

The ensemble, which also includes a versatile Josh Tobin in multiple roles, mine the comic possibilities of the script’s jargon-rich dialogue while maintaining a truthful emotional core beneath the blather. Kaliski and co-director Amanda Holston, for the most part, keep the pacing tight. The action stalls a bit in the show’s midsection, and the emotional turnarounds that drive the plot could be delivered at a more rapid clip. Nevertheless, the play’s startling, darkly hopeful ending makes a timely and touching point. This world is a hazardous place: increasingly so, if the headlines are to be believed. And yet we have to live our lives, embrace one another while we’re here, and somehow try to make sense of it all.