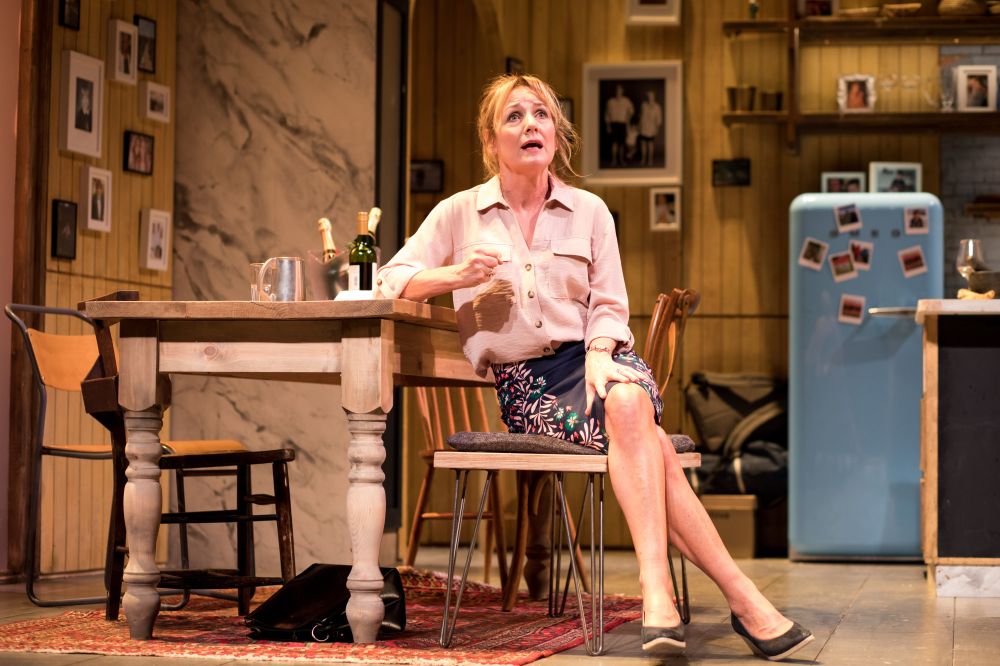 Like the gourmet dishes prepared by the show’s eponymous chef, farce is that is notoriously tricky to get right. The perfect  blend of theatrical exaggeration with a soupcon of realism makes a wild plot plausible and engages the audience in the exploits of a larger-than-life characters. Overdo it, and you end up with over-the-top buffoonery. Go too far in the direction of  raw naturalism and the unique flavor of the genre gets lost. Sorry to say, while there are many fine ingredients in Torben Betts’ mashup of media satire and domestic mayhem, they don’t quite coalesce into a fully satisfying banquet of comedic comestibles.

Something like a UK edition of Martha Stewart, TV chef Caroline Mortimer (Caroline Langrishe) is celebrated for her flawless culinary skills and morally upright character. But her millions of adoring fans are in for a rude awakening when they see the photos a tabloid paper is threatening to publish. Caroline, it turns out, has a penchant for booze, and some cunning paparazzo has captured her losing her decorum on a night out with friends. Caroline’s fast-talking assistant Amanda (Jasmyn Banks) says the pictures aren’t “career ending”, but it’s enough to rattle Caroline (and, of course send her back to the bottle). And that’s only the tip of the iceberg. Public image damage control is one thing: hiding an extramarital affair is another. Caroline and handyman Graeme (James Sutton), are carrying a clandestine relationship – no easy task in a house filled with video crew members – and if Caroline’s blowhard husband Mike (Aden Gillett) were to pick up the scent, things could get ugly. Luckily, he’s too busy tippling, flirting with younger women, and reliving his afternoon at the golf course, to take much notice of his wife (clearly that’s one reason she’s been seeking attention elsewhere). Graeme’s unstable wife Sally (Elizabeth Boag) is a different story. She’s on to her husband’s infidelity and is not to be trusted in Caroline’s kitchen, where freshly honed cutlery is close at hand. While all these tensions are simmering, Mike and Caroline’s son, newly graduated from Cambridge, comes home ready to drop a few bombshells of his own. Oh, and a real estate agent is coming over to look at the house— that is, if the premises isn’t already reduced to ash by the flames Caroline has forgotten to turn off in the kitchen.

The cast is full of fine actors, and director Alastair Whatley, aided by the ground plan of James Perkins’s neatly constructed set, manages the play’s cavalcade of entrances and exits with a sure hand. But the show, unfortunately abounds with missed opportunities. For example, there’s a good amount of setup in the first scene regarding the use of the Mortimer household as a set for the show: Caroline’s Kitchen, we’re told, is actually shot in Caroline’s kitchen. It appears that Betts is building to a big finale, in which the celebrity homemaker’s life falls apart on the air.  Yet for some reason, the cameras never arrive. Similarly, we learn that Caroline’s drunkenness is enough to set the muckraking  media ablaze, prompting the expectation that we’re going to see some real sordidness as she nips her way through the evening. Yet outside of a few slurred words, little mayhem results for her growing intoxication. Even the overall tone of the show, for all its mad events, seems oddly subdued– until, about a third of the way through, Mike Mortimer shows up. Of all the characters, Mike feels the most fully realized, perhaps because, as an old white man, he’s an acceptable target for ridicule. Both in Gillen’s freewheeling performance and in his volatile rhetoric (macho bombast one moment, crippling fear of mortality the next), Mike is simultaneously over-the-top and comically, recognizably human. If the same balance could be struck with the other characters, a visit to CAROLINE’S KITCHEN might leave the audience feeling more satiated. 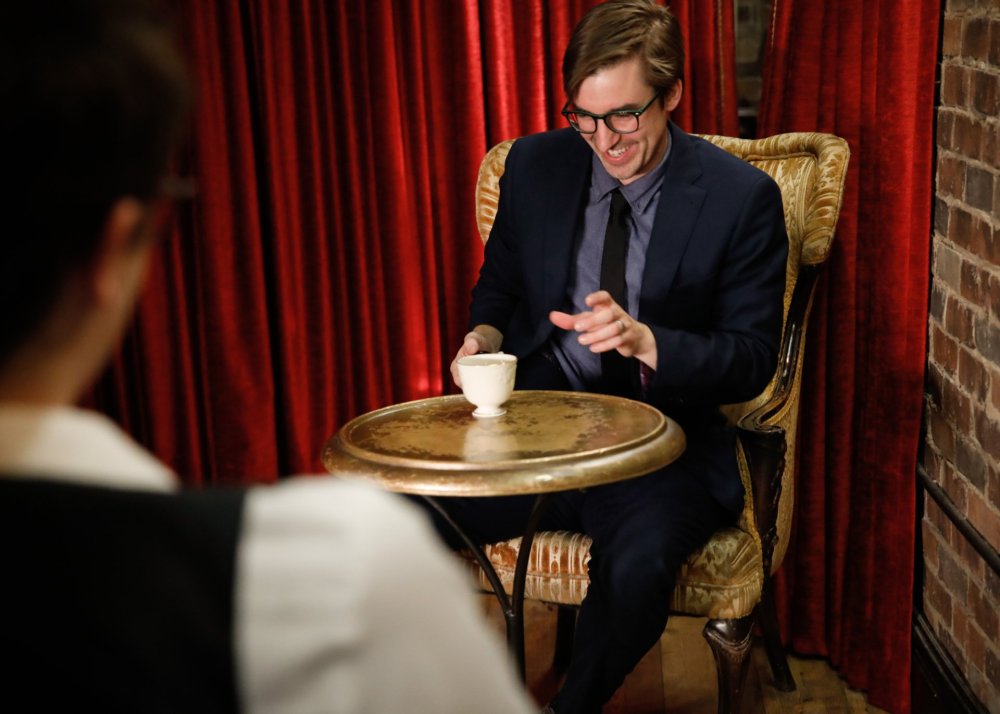 Like a millennial Jimmy Stewart, magician/mentalist Gary Ferrar employs a disarming stammer and easygoing performance style to draw the audience into his world as he cleverly deconstructs the traditions of illusionism. As promised by its title, though, the show isn’t merely about pulling the curtain back to reveal how the tricks are done. Even that trope is turned on its head as Ferrar keeps us guessing as to what pull out of his sleeve next.

For example, in the middle of a tutorial on misdirection, an audience member seemingly  stays one step ahead of Ferrar’s prestidigitation – only to look down and discover his watch is missing. In the extra-sensory portion of the show, Ferrar feigns deep concentration as he divines a specific details about a complete stranger’s life with devastating accuracy. But is this brilliant mentalism, or has Gary merely checked her Facebook feed?  There are many such shell games in NOTHING HERE IS REAL. And just as we think we’ve got it all figured out, objects appear as if commanded purely by thought, sleight-of-hand takes us by surprise, and we’re back to feeling that sense of wonder that keeps audiences, even in the age of smart phones, fascinated by parlor magic.

As Ferrar shares his own personal details (delivered with sincerity whether real or concocted) and breaks down our inhibitions with audience participation games, lines between performer and spectator begin to blur. The result is a pleasantly co-conspiratorial atmosphere: refreshingly lighthearted and different from say, the more hushed and eerie mentalism of Steven Cohen’s CHAMBER MAGIC.

There are times when the magician’s grip on the audience begins to slacken. Some of the bits take a longer time to build than seems necessary, or don’t pack quite the wow factor they might. Thankfully, though, Ferrar’s thought-provoking and playful machinations hit more often than they miss, and his unassuming charm and fresh spin on a classic form make NHIR an evening – for real – well spent.