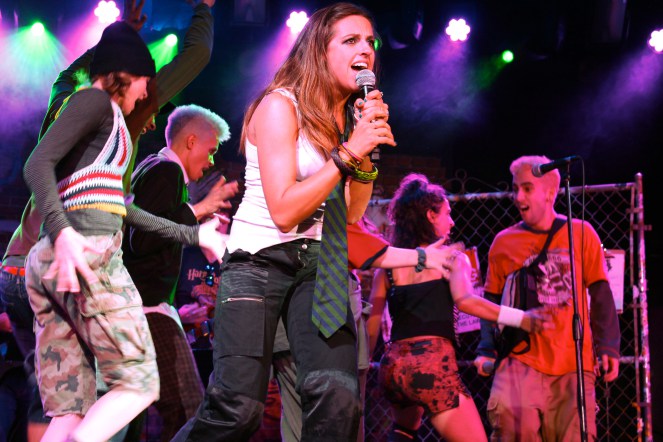 Believe it or not, the generation that went to high school in the early 2000s is now old enough to have its own nostalgia culture. What the creators of GREASE did for the 50’s, librettist Anderson Cook and singer-songwriter Ben Lapidus are attempting to do for the era when songs by Good Charlotte and Blink 182 dominated the alternative airwaves. It’s not hard to understand the appeal of the genre: pop punk gave kids with the best of both worlds. It borrowed the raw vocals, power chords and rebellious spirit favored by the likes of Rotten and Ramone, but traded in the bitter nihilism of early punk for catchy hooks and relationship-based lyrics. The new(ish) sound provided perfect soundtrack for coming of age at the strip mall.

In keeping with the rock and roll energy of the score, POP PUNK HIGH is not presented as a traditional theater piece, but as an immersive event at the downtown club Le Poisson Rouge. Audiences are free to grab a drink at the bar, mill around the venue, and interact with cast members as they float through the crowd. A rousing opening number introduces us to the seniors of Pop Punk High, who are gearing up for a much-anticipated battle of the bands. The underdogs here are nerdy Derek (Lapidus) and his high-achieving but socially awkward best friend Tib (Amanda Centeno).  Derek is consumed by envy as his nemesis Skeet (Patrick Sweeney), seems to have everything: mad guitar skills, a cool skateboard and a dad (Jacob Grover) who can use his power as high school principal to punish Skeet’s enemies.  Worse, Skeet’s girlfriend is Amanda Bunkface (Jess Kaliban), on whom Derek has a desperate crush.  The unfairness of the situation hurts all the more because Skeet treats Amanda like a roadie for his band, never acknowledging the fact that she has musical ambitions, too.

Derek’s begins to change when he and Tib discover a can of Axe body spray in the principal’s office. Inside the can is none other than the soul of pop punk priestess Avril Lavigne (Jess Kaliban), who has been slain and replaced by a lookalike. Avril (who seems to be something of a genie as well as a ghost) promises that, if Derek can find the identity of her killer within 24 hours, she will grant him three wishes. The Pop Punk kids are in for quite a shock when Derek is suddenly able to skateboard like a champ, “shred” his guitar, and, well, show off a startling new anatomical enhancement. As with many such fables,  though, the moral is, “be careful what you wish for”.  All the things Derek thought he always wanted only serve to swell his head. He screams at his parents, turns his back on Tib, pushes Amanda’s band off the stage, and basically loses sight of all the things in life that really mater. Luckily, the cosmos isn’t done with Derek, and an unexpected development offers our hero an opportunity to redeem himself before it’s too late.

Clocking in at an intermissionless 90 minutes, the show just enough plot to support its pop-culture inside jokes and give each of its talented cast members a turn at the mic. Director Felicia Lobo keeps the energy high throughout, while choreographer Aubyn Heglie has the cast fist pumping and head banging with brio.  Designers Andrew DG Hunt (Lighting) Olivia Vaughn Hern (Costumes) and Hannah Levesque (Sets) add just enough color and kook to frame the show in a fittingly cartoony universe.  The one thing POP PUNK has too much of is, well pop punk. Lapidus has a natural feel for the genre, but after an onslaught of songs played mainly in the same style, the freshness of the score begins to diminish. The show could use more selections like the comedy song sung by Derek’s hopelessly square parents (Eric Wiegand and Mclean Peterson), which provides a welcome respite from the high decibel, anthemic tone that animates the bigger numbers. There have been quite a few iconic musicals, like CABARET, HAMILTON, THE BOYFRIEND and the aforementioned GREASE, that stick closely to a specific musical idiom and yet provide their songbooks with a satisfying level of variety. There are worse things Lapidus and Cook could do than to emulate their example.