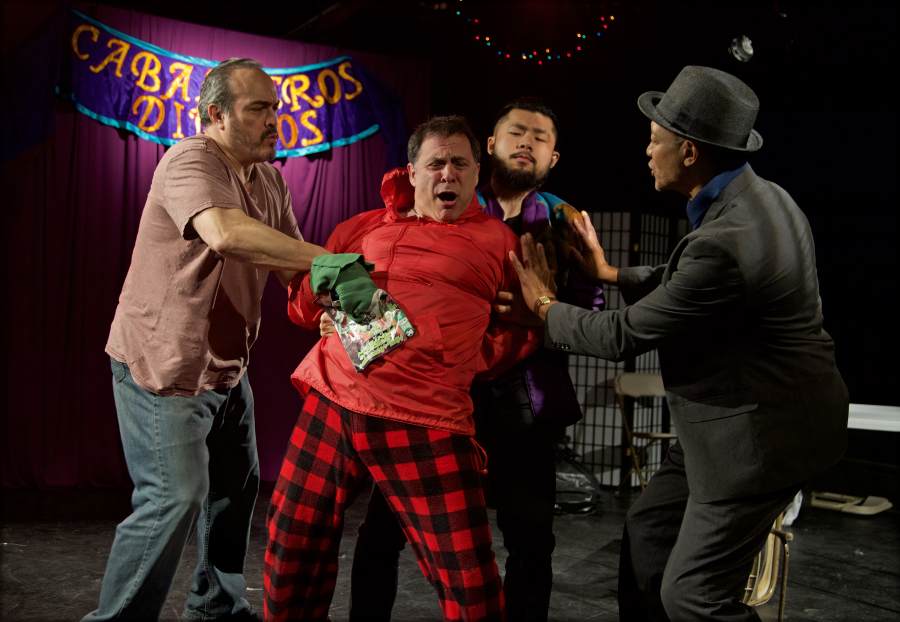 Written and directed by Paul Calderon

A kind of AMERICAN BUFFALO simmered in the flavors and rhythms of the barrio, Paul Calderon’s gritty crime drama puts a fresh spin on the heist-gone-wrong genre. Beginning on a surreal note, DIVINE HORSEMEN’s prologue shows Jojo (Sebastian Mitre) committing seppuku while images of video superheroes, salsa musicians, and other elements of his addled psyche. Jojo’s suicide is but one of many casualties that have devastated the neighborhood’s old guard. Hardly anything remains of crew that used to hang out at the Caballeros Divinos social club, and the few who have managed to sidestep death and imprisonment are finding it harder and harder to make a buck, let alone get a little respect. Iffy (David Zayas), runs a candy store that proves an easy target for robbers. Dapper Willie (Paul Calderon), ekes out a living as a thug-for-hire. Among other rackets, Iffy and Willie kidnap dogs and return them for reward money. It’s a distasteful business, especially when the less desirable dogs have to be euthanized with baseball bats.

Prospects don’t seem much brighter for the younger generation. Benny (Robert Lee Leng), who was once a promising baseball pitcher, is now reduced to seducing and bilking older women. Unfortunately, it’s not enough: Benny owes money to a local loan shark, and is running out of time to pay it back. All three of these desperate men could use a break, and one finally arrives in an unexpected place. Jojo, it turns out, left behind a huge cache of mint-condition comic books and baseball cards. Benny convinces Iffy and Willie to help him make the most of this treasure trove of collectibles, but there is, of course, a catch. To get all that swag out of Jojo’s crib, the gang will have to sneak past his autistic little brother Raffi (David Deblinger). This proves challenging, especially when Raffi turns up at the social club at the worst possible time. Easily provoked and prone to wild tantrums, Raffi is more dangerous than a loaded gun. This volatile situation inevitably descends into madness, as the men find themselves forced to make split-second decisions in a world where human life has less value than an old issue of Spiderman.

Calderon’s dialogue captures the cadences and embellishments that distinguish New York Street-speak. He and Zayas make the most of their staccato exchanges and imagistic monologues, while also embodying the physicality of their archetypes. Zayas lumbers about the stage like a weary combat veteran who has seen too much bloodshed. He is nimbly counterbalanced by the agile Calderon, who moves with the grace and lethality of a prizefighter in his prime.

For all it’s vitality, DIVINE HORSEMEN is still in a raw stage of its development. It needs a more even pace, and a smoother execution of its fight choreography. Most likely, though, if the production gets the longer, better-funded run it deserves, these rough edges will correct themselves in time. 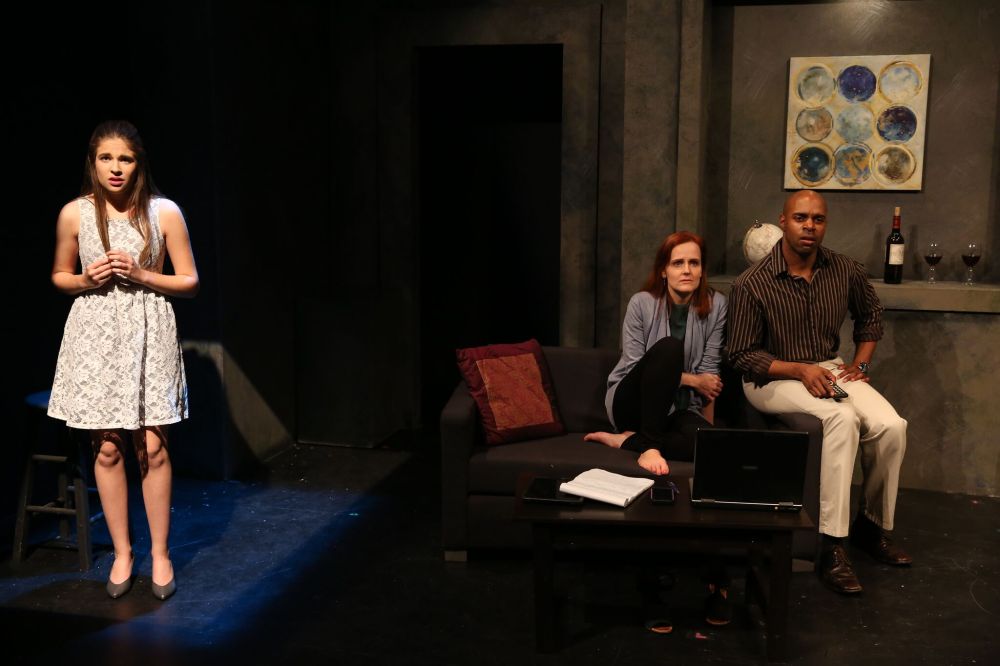 Always worth a look,  LABUTE NEW THEATER FESTIVAL varies from year to year in length and tone. This year’s edition is, in the best sense of the word, leaner than in previous years. The energy seldom lags, and all three cherry-picked one acts are provocative, timely and adroitly crafted.

The plot of Neil LaBute’s HATE CRIME unfolds like a James M. Cain novel. Man 2 (Chauncy Thomas) paces in his luxury hotel room, watching, appropriately enough, a documentary about alpha male animals in the wild. He is joined by likeable Man 1(Spencer Sickmann), his devoted lover who brings coffee, Danish pastries and smiles. Man 2 is understandably anxious. He wants to make sure the scheme the two of them are hatching goes off without a hitch. Here’s how it works: Man 2 is going to marry a wealthy older man. Right after the wedding, Man 2 will murder the old guy and make it look like a gay bashing incident. He and Man 1 will then live happily ever after on the dead man’s life insurance. As the two conspirators rehearse the plan, they begin to reveal symptoms of the nagging self-contempt – exacerbated by society’s biases- that leads to aberrant behavior. The play feels like Scene One of a larger story, and it would be interesting to where this 21st Century Double Indemnity would go if it were expanded to a full-length piece. As it is, we’re left with a cliff hanger. But, as always, LaBute’s mordant writing is well served by the short form. The dynamic between coolly predatory leader and eager protégé is expertly mined for both laughs and chills by Thomas and Sickmann.

In WINTER BREAK, by James Haigney, religious conversion divides an American family. Christened Joanna, a high-achieving college student (Kelly Schaschl) now insists on being called Aisha. Having adopted Sufism as her guiding influence in life, she wears a head scarf and is planning a trip to Turkey to study the Koran. Aisha’s Episcopalian mom Kitty (Autumn Dornfeld) is worried she’ll throw away her education. Her brother Bailey (Sickmann), takes a more extreme view, going as far as calling Aisha’s Facebook friends “sadistic, Nazi, anti-Semitic, homophobic delusional fanatics.” Aisha argues back, pointing out that life in the status-driven west is largely devoid of real meaning and that the “freedoms” most Americans enjoy amount to little more than empty self-indulgence. The real agenda behind the conflict is, of course, as personal as it is ideological; Aisha’s need for a sense of self is as strong as Kitty and Bailey’s fear of losing her. The action stalls somewhat as the hysterical Bailey and exasperated Aisha hit the same emotional notes too many times. When it’s cooking, though, Haigney’s intelligent script shows remarkable insight and compassion in its even-handed treatment of both sides of the debate.

The most innovative entry of the evening is Carter W. Lewis’s PERCENTAGE AMERICA,
which ruthlessly skewers a host of contemporary phenomena from online dating to presidential tweets. After meeting though a matchmaking website, Arial (Dornfeld) and Andrew (Thomas) discover they have a lot in common: Both have posted horribly misleading information on their profiles. The smart thing to do would be to call the whole thing off. Yet, once the pretense is dropped, both parties feel an exhilarating sense of relief. Honesty, they learn, can be a potent aphrodisiac. This discovery leads Arial to suggest that she and Andrew experiment with what she considers a kinky activity: deciphering the evening news. Amid all the hype, there has to be some truth, provided one is brave enough to look for it. The top story the news outlets concerns a preadolescent girl (Schaschl) who has broken into the White House rose garden and seemingly berated the president using obscene language. Dubbed variously “The Whore in The Garden”, “The Rose Garden Terrorist” and host of other epithets, the young girl becomes the object of rampant speculation. Like a modern-day Woodward and Bernstein, dig through the dirt, consult clandestine sources build their own narrative – and discover that the truth is not for the faint of heart. Lewis’s razor-sharp satire comes to life as Dornfeld and Thomas throw themselves into their roles with farcical zeal. Schachl balances their antics with arresting vulnerability as the story speeds to its dark, and unexpectedly touching, conclusion. 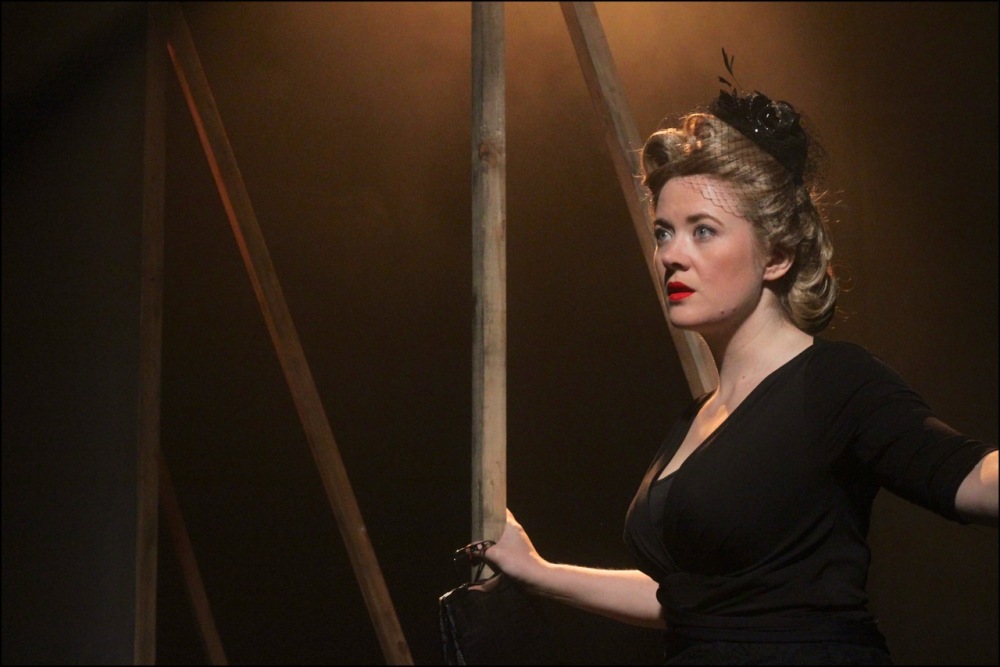 Written and performed by Joanne Hartstone

We all know fame has its dark side. Some show business luminaries reach the pinnacle of stardom only to topple to tragic depths, others simply fade with time. For many aspiring actors though, success proves elusive, and Hollywood can be a very lonely place for those who remain stuck on Obscurity Boulevard. In an affectionate, if flawed tribute to the screen sirens – and wannabes – of yesteryear, dynamic writer-performer Joanne Hartstone puts her considerable skills to work exploring the emotional hills and canyons of 1940’s Los Angeles.

The story begins in Saint Louis, where little Evelyn Edwards is born into a working-class family. After the death of her mother and the collapse of the stock market, Evelyn and her father are destitute and have to move to a “Hooverville” community. Eventually, Dad’s fortunes improve and the family departs the shanty town for a room in a comfortable home. The landlady is fond of playing the piano, and Evelyn learns to sing and dance. She spends her pocket money at the pictures, and soon learns all about the lives of the great leading ladies. She even develops a morbid fascination with starlets whose lives ended sadly, like Jean Harlow, and Peg Entwistle (who actually did jump off the Hollywood sign).  World War II brings a boost to the economy, and Evelyn’s father hears that Los Angeles is “about to become the boomtown of all boomtowns”. The timing couldn’t be better. Evelyn is 18, comely, and ready to try her luck in show business. Now known as Evie, the enterprising young ingenue takes a job as a studio messenger and dances with GI’s at the famous Hollywood canteen, goes on auditions, takes dance lessons, and rubs shoulders with a number of Hollywood notables. Yet somehow the doors to stardom refuse to open for her. Getting past the gatekeepers will require a sacrifice: one the girl from Missouri isn’t sure she’s willing to make.

Hartstone’s writing is concise and vividly descriptive, packed with images that evoke the bustling atmosphere of golden age Hollywood. Her well-researched script is populated with entertaining archetypes, including real life figures like actor Alan Hale, studio exec Jules C. Stein and the infamous Scotty Bowers, a pimp who catered on the downlow to both gay and straight celebrities. Plotwise, though, some of the show’s potential goes untapped. We’re told that things don’t end well for Evelyn’s father, who appears to be mixed up in some shady business. And the young actress herself dips her toe into the L.A. underworld. Yet the play ends before these darker plot elements have a chance to cook. It’s a puzzling choice. If Evie’s life is like a movie, why not make it a film noir?

As a performer, Hartstone and embodies both the vulnerability of a struggling artist and the independent moxie of the quintessential Swing Era dame. However, she needs a bit more guidance from director Vince Fusco, who should bring out the subtler notes in her performance. Most of Evie’s lines are delivered in the same high vocal register, with a melodramatic warble added for emphasis. At first the affectation makes sense: Evie knows she’s something of a cliché: a naive Hollywood hopeful playing the part of Naive Hollywood Hopeful. It’s only natural that she imitates the stylized speech patterns of the heroines she admires. Over the course of 70 minutes, though, the conceit wears thin. A softer, less affected approach might have played better in the Cino Theater’s intimate space. Despite these missteps, Hartstone’s warmth and charisma shines through and she is clearly a talent to watch. Unlike her alter ego, she really does have the skills, sensuality, and drive to become a star. With a little more trust in her gift, and in her audience, she could be ready for her close-up.