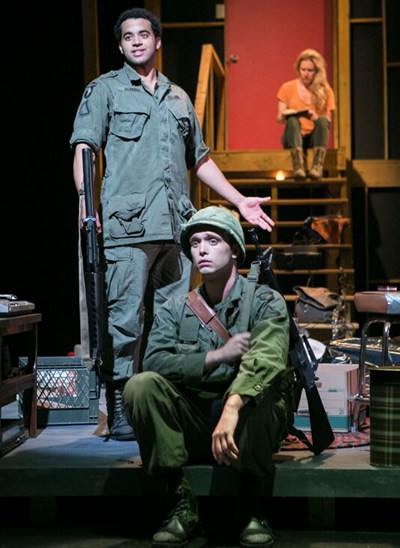 When people quote General William Tecumseh Sherman’s famous maxim, “War is hell”, they’re usually referring to the carnage and chaos of the battlefield. But for many soldiers, the fires of war don’t stop burning after the military campaign has run its course. They rage on inside the veteran’s psyches, consuming their lives, their families, their society. Using dual time frames and a collage of theatrical techniques OCCUPIED TERRITORIES paints a searing – if flawed – portrait of the ongoing repercussions of war.

Single mom Jude Collins (Nancy Bannon), returns to her hometown to bury her father. Jude is due to check into rehab in a couple of days, and hopes to use the time to reconnect with her preteen daughter Alex (Ciela Elliott). Mother-daughter relations are strained, however, as Jude has been unable to really be there for Alex. It’s Jude’s sister Helena (Kelley Rae O’Donnell), that’s been raising the child while Jude attempts to sort her life out. Adding to the tense family dynamic is the fact that Jude and Helena have sharply different views of their late father. To Helena, he was a good man who bore the scars of war as well could be expected. Jude sees him as an unstable and irresponsible father who used his brief tour of duty as an excuse for bad behavior. Slowly, though, Jude’s perspective begins to shift. Left alone in the basement of the old house, she goes through her father’s collection of photos and artifacts from the war. She also helps herself to his prodigious stash of prescription medication. As Jude slides into a reverie, the tromping of combat boots and the voices of soldiers chanting cadence calls is heard. The audience is brought into the scene as the actors march behind the seats and up the aisles of the theater. The action shifts to Vietnam, 1967.

Here we meet the young Private Collins (Cody Robinson) and the guys in his platoon. Even-keeled Lucky (Diego Aguirre) operates a shortwave radio, which Sergeant Ace Andrews (Donte Bonner) uses to alert his superiors that his men can’t hold their position and are running dangerously low on rations, ammunition, and medical kits. Predictably, the hoped-for supply drop is a long time coming, and morale worsens among men who have already seen too many casualties. Particularly caustic is the Brooklyn-born Corporal Michael “Ski” Makowski (Scott Thomas),who gives Collins no end of grief but deep down is actually looking out for the new recruit. Rounding out this motley gang are the garrulous Private Alvarez (Thony Mena), quiet but courageous Hawk (Nile Harris), and the frail Private “Hardcore” Harcourt (Nate Yaffe), who hasn’t spoken since a word the death of his buddy two weeks previous.

Collins, nicknamed “Cornbread” by his peers, carries his Nikon camera everywhere, but it’s his innocent eyes that are really taking in the details. He sees more than his mind can process, especially as the futility of the mission grows clear. In this incomprehensible world, any sense of moral certainty is destroyed and wanton waste of human life becomes the new normal. No one seems to know why this war is being fought in the first place, let alone whether the U.S. has any chance of winning it. And yet the slaughter continues, and the soldiers have only each other to cling to. The love Collins feels for his comrades in arms will supersede all other relationships, and the battle Jude fights for her father’s affections will prove unwinnable.

To a degree, we’ve seen this story before: an ethnically mixed battalion bonding under heavy fire: a young man’s disillusionment in the foxhole. But co-creators Nancy Bannon and Kellye Maxner bring an innovative sensibility to familiar Vietnam story. Stark realism is juxtaposed against lyrical dance sequences and colorful photos of smiling Vietnamese villagers. The show’s immersive approach effects both the audience and the ensemble. Like the G.I.s they portray, the actors coalesce into a group of men whose mutual trust and loyalty are palpable in a physical, immediate way that gives the show’s brutal ending its devastating impact.

Despite these strengths, though, the show suffers from some missteps. For starters, its title is misleading: the term “occupied territories” today refers to the Palestinian-Israeli conflict. Also, the civilian side of the narrative is considerably less developed than the soldier’s story. More details about the Collins family’s past and present would have given more dimension to the conflicts Jude, Helena and Alex are working through.

Even so, OCCUPIED TERRITORIES’ rough edges are outweighed by its raw performances, well-researched story line and flawlessly choreographed battle scenes. Its images and voices reverberate long after the curtain call.

Daring for its time, Harold Arlen and Yip Harburg’s 1957 parable sported an ethnically diverse cast (led by Lena Horne and Ricardo Montalban), a calypso-inflected score, and anti-establishment message. 60 years later, the show feels surprisingly fresh, dated only in the sense that its score (originally written for Harry Belafonte) reflect a 1950’s conception of Caribbean songcraft. To modern ears, accustomed to the cadences of reggae and world music, Arlen’s tunes sound more like they originated in the West 40’s than in the West Indies.

Content-wise, however, JAMAICA couldn’t be more relevant. Harburg, blacklisted at the time for refusing to name names, took a jaundiced view of Cold War America, and the show’s book takes aim globalism, disaster relief, nuclear threats, and a host of other topics that still preoccupy us today. Even evolution is skewered, as a group of monkeys, loathe to be associated with anything as uncivilized as mankind, dismiss Darwin’s theory as fake news.

Set on the fictional republic of Pigeon Island, JAMAICA begins with a brief tryst between a local teenage girl and a young American tourist on vacation with his folks. Both sets of parents make it very clear they are not in favor of the romance, but the kids sneak around and do it anyway. Soon the girl discovers she is pregnant, but only after the boy has left the island with no apparent plans to return. Flash forward to 20 years later. Mama (Corea “Cori” Robinson), is reaching a point where she can no longer control her daughter Savannah (Taylor-Rey “T-Rex” Rivera). The young woman’s beauty, and her headstrong ways, have become the talk of the village. She is courted by eligible bachelor Koli (Jason Johnson), the captain of a fishing boat, but Savannah has other ideas about her future. The only island she’s interested in is Manhattan, where she can hobnob with the glitterati and enjoy a lifestyle filled with modern conveniences – if only she can find a way to get there. Her ticket soon arrives in the form of Joe Nashua (Daniel Fergus Tamulonis), an New York businessman seeking to get rich quick in the jewelry business. All he needs is a few divers willing to risk being devoured by sharks in order to harvest Pigeon Island’s rich supply of pearls. While many of the islanders are seduced by Joe’s offer of Yankee dollars, Koli treats his arrival with consternation. In his view, the American clearly doesn’t have the community’s best interests – or Savannah’s – at heart.  Further complications ensue when a fierce tropical storm hits the island, derailing Joe’s entrepreneurial ambitions and throwing the whole social order chaos. In the aftermath of the storm, all the characters reevaluate their priorities and Savannah begins to wonder, like another famous Arlen-Harburg heroine, if there really is no place like home.

With her dynamic personality and impressive vocal range, Rivera makes an ideal choice for the restless Savannah. Johnson’s tough, practical-minded Koli provides her with an apt foil. The supporting players each have a moment to shine, and they go at the task with talent and brio. Robinson’s powerhouse voice and Tamulonis’s tight timing add flavor to the mix, while Chris Price and Barbyly Noël bring their comedic skills to a romantic subplot involving a passionate government clerk and his standoffish desideratum. 12-year old scene stealer Treymal R. McClary is highly enjoyable as the scrappy street philosopher Quico. Under Keith Lee Grant’s snappy, exuberant direction, the ensemble members (Zuheila Jason, Isais Miranda, Yesenia Ortiz, and Hanna Ventura) coalesce into an inviting community. Mary Myers’ costumes burst with Caribbean color and flow easily with the dancers’ movements. There is only one aspect of the production that feels arbitrary. Throughout the evening, the numbers are embellished with video projections (a commonplace element in theater these days). Although animator Edward Corcino has fashioned some inspired imagery, it seems unnecessary to add extra visual layers to theatrical action that is already compelling. Less would have been more. This, however, is a minor drawback in a show that is otherwise “coconut sweet”.