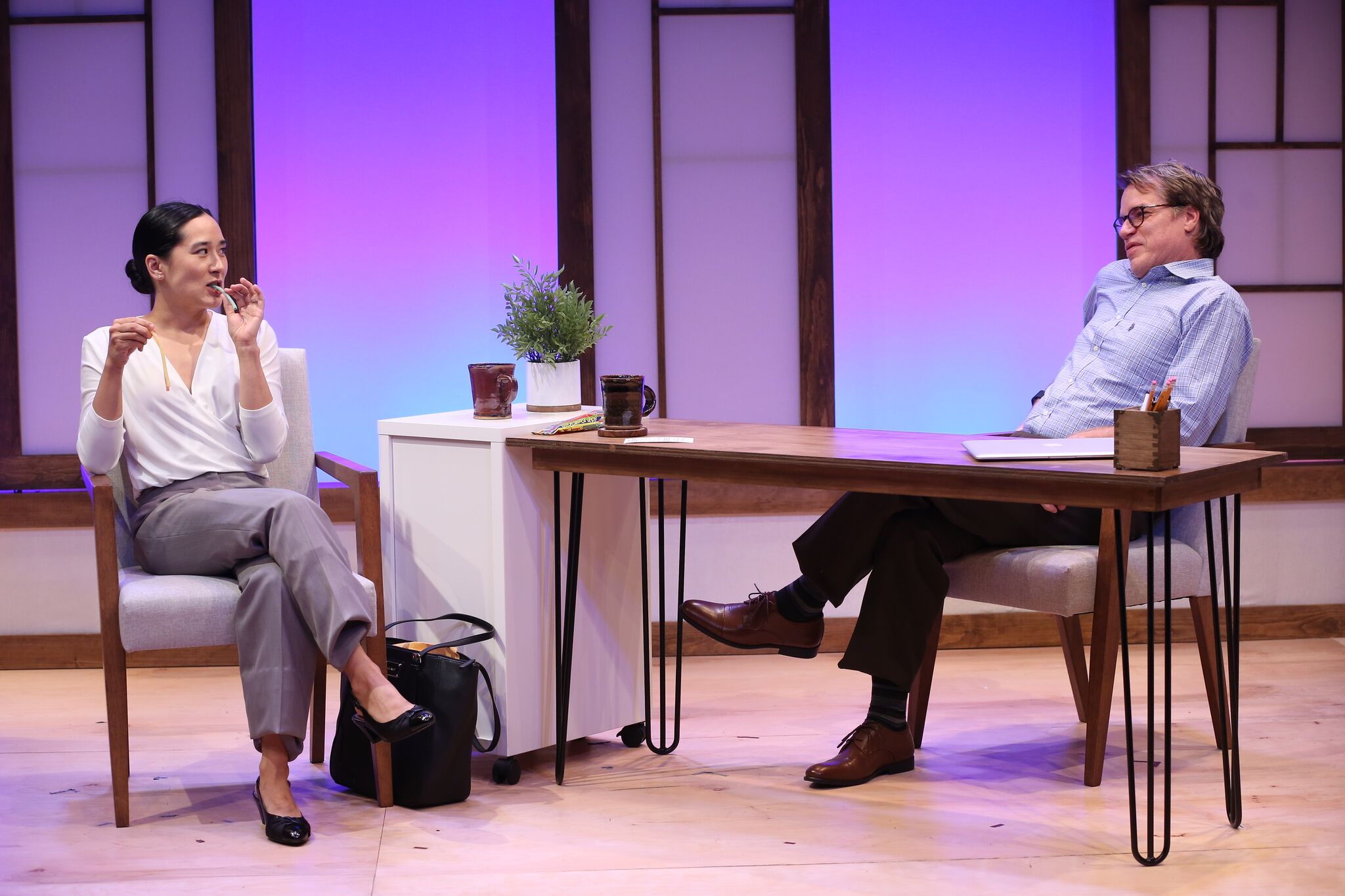 Of the three one acts that comprise Series B, the most confidently delivered is Chris Cragin-Day’s two-hander which probes the subject of women’s role in religion. Kim (Jennifer Ikeda), a successful professor and mother of young children, is dedicated to her egalitarian ideals as well as to her Christian faith. Cliff (Mark Boyett), with whom Kim has been friends since high school, belongs to the same church and has just been promoted to pastor. He’s eager to make a good impression, and Kim isn’t making it easy for him. She has taken the unheard-of step of writing down a woman’s name as nominee for the position of church elder. Fearful that he’ll be fired for such a blatant heresy, Cliff at first refuses to back her up on this. Kim perseveres, but she’s unable to strike a bargain until she’s willing to hear Cliff out.  A WOMAN adroitly manages to avoid becoming preachy despite its topic, and its central argument is more nuanced than the usual Patriarchy-vs-Sisterhood commonplace. Under Kel Haney’s subtle direction, Ikeda and Boyett share and endearing chemistry and shade their roles with wit and empathy.  Overall, though, the lacks heat, seeing as its core issue isn’t really an urgent debate in today’s world. There’s always room for improvement, of course. Yet all but the most archconservative Christian institutions have abolished any prohibition against female leadership, and many sects, like the Presbyterian, Mennonite, and Methodist churches (to name but a few) to have been ordaining women for decades. Cragin-Day’s heart is in the right place, but she seems to be looking in the wrong cathedral for glass ceilings.

A hip comedy of millennial manners, Lindsey Kraft and Andrew Leeds’s WEDDING BASH represents the kind of sketch material SNL should be doing but rarely delivers.  Newlyweds Dana (Rachel Napoleon) and Lonny (Donovan Mitchell) are settling into domestic life after what they believe was a magical wedding. Their dinner guests, Alan (Andy Powers) and pregnant Edi (Georgia Ximines Lifsher), don’t agree. But in today’s walk-on-eggshells culture they feel compelled not to say anything critical. Finally, Alan decides he’s had enough. Conscripting Edi into his honesty campaign, he launches into a self-righteous dressing down of the “selfish wedding” in which the guests were coerced into spending a fortune in travel and accommodations only to suffer through a pretentious ceremony a paltry supply of booze. Lonny and Dana fire back with their own frank admissions:  Those wedding gifts you thought would dazzle us? Well, think again. Things escalate from there, and the resulting chaos leaves no one unscathed. The one thing BASH lacks is a satisfying punchline, but thanks to the comedic skills of the cast, and to Rebecca Lord-Surratt’s uber-bourgeois set design, there are plenty of laughs along the way.

Neil LaBute looks under the surface of professional sports in BREAK POINT, a drama centering on a major tennis tournament. Flush with endorsement money and a staggering string of championship wins Oliver (John Garrett Greer) appears to have everything. Internally, though, it’s a different story. Oliver’s under tremendous pressure to win 20 majors, breaking Federer’s record, and to do that he’ll need to make it to the finals in the French Open. Standing in his way is a formidable opponent, who also happens to be an old acquaintance. Stan (Keilyn Durrel Jones), hasn’t had the same success as Oliver, but his prowess is undeniable—enough so that Oliver’s chance at the title could be blown during the semis. Oliver hits upon an ingenious, if ugly, solution. Stan would find himself in the money if he’s willing to throw the match. Like a surprise serve, this indecent proposal throws Stan off for a moment, but he soon rallies, volleying his own slice shots into his opponent’s court. Tensions mount as the outcome of the match and the true intensions of the players grow increasingly uncertain. Both actors bring an athlete’s poise and kineticism to the game, with the solid, meditative Jones balancing Greer’s fretful garrulousness. As a director l, LaBute’s could stand to tighten the pace, and focus the actors’ energy more forcefully. But, as always, his sharp, provocative writing remains a highlight of the festival.

Adding a dash of 21st Century hipster sensibility to the traditions of vaudeville and commedia dell'arte, Atlas Circus Company’s high-energy romp follows the misadventures of hapless young Everyman as he faces overwhelming obstacles in his quest for success and love in the big city.  Accompanied by composer David Evans at the piano, the troupe cavorts about the stage with stunning energy and a palpable joy, spinning everyday situations into farcical flights of giddy nonsensicality. Outside of an occasional lip-synched show tune or and some falsetto gibberish, there is no dialogue in LUCKY. The comedy’s all physical, and the ensemble are all highly skilled in the arts of acrobatics, mime, dance and improv.

The show is composed of nine lazzi, in which the eponymous hero says goodbye to his small-town family and heads off to New York. Armed only with an attaché case and a can-do attitude, he goes looking for work. But holding on to job (or even a sandwich) proves challenging when everything from gravity to social anxiety conspires to sabotage Lucky's efforts.

To elaborate further  would be to give away the cavalcade of surprises LUCKY has in store for its fortunate audience. Suffice it to say that ordinary objects are transformed into percussion ensembles, rapid-fire juggling contests are followed by feats of hair-raising aerialist acts and lyrical dance routines blend with forthrightly lowbrow pie-in-the-face slapstick shtick (actually it looks more like ricotta cheesecake: this is New York after all).

Lead actor Henry Evans has clearly made a close study of the great silent comedians, and his comic persona is flavored with a soupçon of Chaplin and echoes of Keaton and Lloyd. Yet Lucky is also an original creation, enlivened by Evans’s startling athleticism and acrobatic prowess. Paradoxically, it takes tremendous coordination to be a great stage klutz, and Evans, like his predecessors, has mastered the art of the meticulously choreographed accident.

Aided by Koren Harpaz’s animated backdrops, the supporting cast rounds out the whimsical cartooniverse through which Lucky meanders. Sporting a mesomorphic physique and a devilish grin, Leo Abel nimbly morphs into a panoply of urban archetypes, including a mugger, a construction worker and a vein bachelor eager to impress his date. With pompous brio, Russell Norris flings his tall, slim body into multiple variations on the theme of Tyrannical Boss. Rubber-limbed Avery Deutsch is irresistibly charming as Lucky's coworker and would-be love interest.

Here are a few added bonuses: Though by no means dumbed down, LUCKY is appropriate for all ages. Tickets are affordable, and Dixon place has a cozy bar on the first floor where the cast and creatives can often be found mingling with audience members. 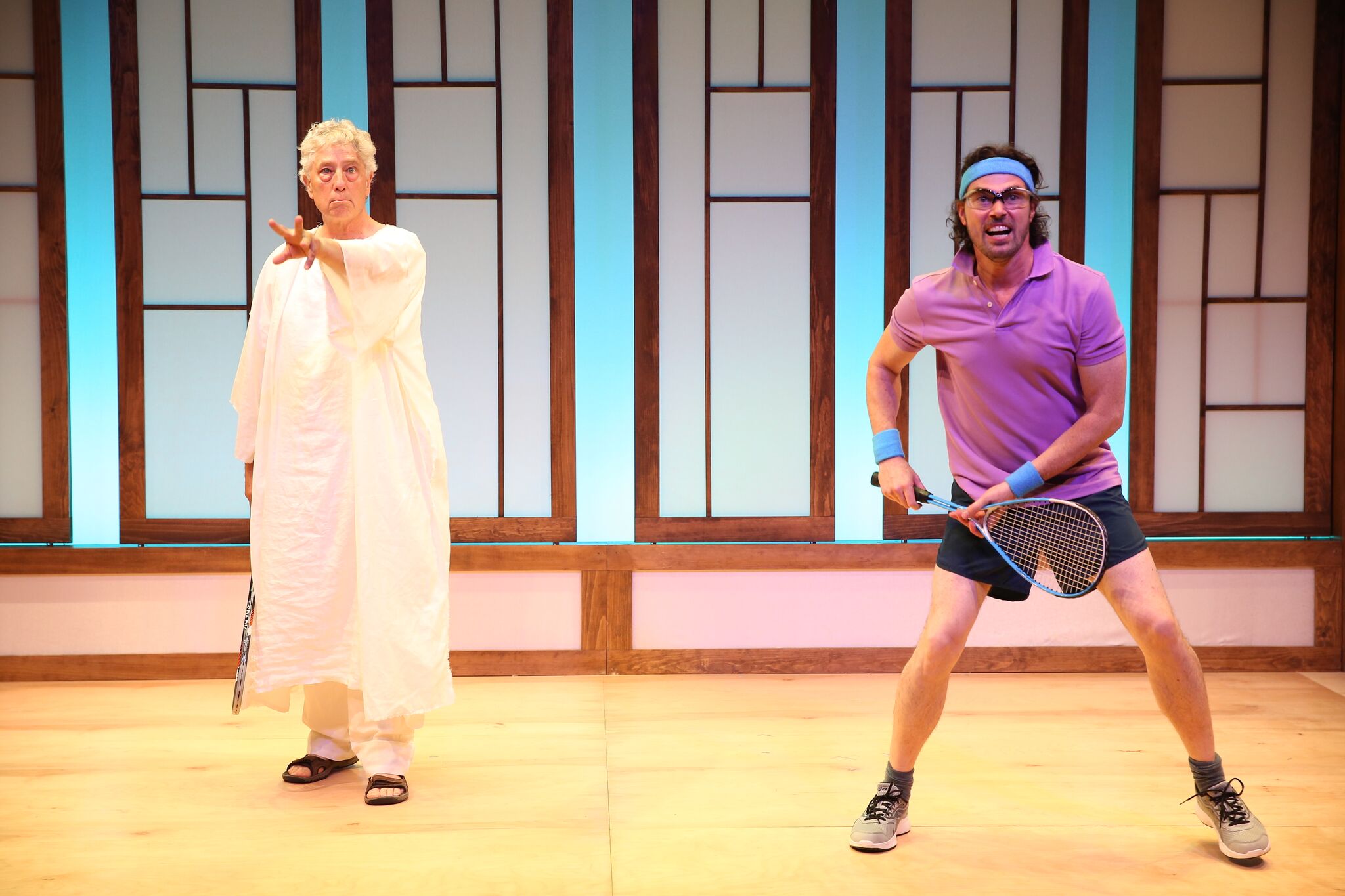 Now celebrating its tenth anniversary, Thoughline Artists’ SUMMER SHORTS festival continues to offer an important showcase for actors, directors and writers of short-form theater. As usual, some scripts are more fully realized than others, but the caliber of the acting and the quality of the production remains consistent throughout the evening.

Anyone who’s ever lost a pet will empathize with the protagonists of Melissa Ross’s JACK.  Faced with the sad task of disposing of their beloved dog's remains, Maggie (Claire Karpen) and George (Aaron Roman Weiner in for Quincy Backer-Dunn) agree on a perfect spot: The Union Square dog run where Jack spent some of his happiest afternoons. It sounds simple enough, but as the two ex-spouses prepare to scatter the departed's ashes, old feelings bubble up to the surface. The ink has barely dried on their divorce, and though both are getting on with their lives, the wounds of separation haven't fully healed.  Thanks to Ross’s skillful and compassionate writing and Mimi O’Donnell’s naturalistic direction, a complex portrait of a troubled marriage begins to emerge. We get a glimpse of the chemistry that made George and Maggie a good couple at first, as well as the inertia that eventually pulled them apart. Weiner and Karpen allow themselves to be entirely vulnerable on stage, allowing the comic and poignant beats of the play to flow organically.

PLAYING GOD comically pits a mere mortal against the wrath of the Almighty. Egotistical obstetrician Scott Fisher (Dana Watkins) decides to interfere with the natural birth cycle and hasten the arrival of his Brittany’s (Flora Diaz) baby. He's not doing it out of concern for the patient, he just wants to reschedule the due date so he can dash off to Chile while the skiing is still good. God (Bill Buell) sees this as an encroachment on his territory. As he tells his assistant (Welker White), Fisher “needs a crash course in humility”. Soon, the young doctor finds himself literally playing God– on a squash court in Boca Raton. Assuming he'll trounce the old timer, Fisher is in for a rude awakening. Playwright Alan Zweibel could stand to further explore the comedic possibilities of his premises. But the script does contain its share of grand one liners and even a bit of Shavian discourse on the subject of Science vs. Faith, all of it volleyed with expert comic timing by Buell and Watkins.

Graham Moore's docudrama ACOLYTE takes place in 1954, in the New York apartment where Ayn Rand (Orlagh Cassidy) plays hostess to a couple of her eager young disciples. Recently wed, Barbara (Bronte Englandnelson) and Nathaniel Branden (Sam Lilja) are having some marital difficulties– and not just because he's an Aristotelian, while she favors the teachings Plato. Ayn, of course, capitalizes on the opportunity to preach her own philosophy of rational self-interest. Ayn's husband Frank (Ted Koch) purports to be a Regular Joe with little grasp of all this epistemological mumbo jumbo. In fact, he's more aware than anyone of what his wife is capable of. Loosened by booze and heady rhetoric, Nathaniel confesses that he's been harboring a strong attraction to Ayn, and Ayn admits she wouldn’t kick him out of bed either. Of course, if there's any swinging to be done, it must be handled in true Objectivist style, with all interested parties on the same page. How about it, Barbara? Willing to lend your husband's Johnson to The Cause?  The dramatic tension builds effectively as this rather Albee-esque dynamic threatens to hurtle the characters into uncharted emotional territory. Unfortunately, though, the energy dissipates when Ayn rises from her perch to deliver a lecture on the evils of Liberalism and other social trends. Though the charismatic Cassidy delivers the aria with compelling conviction, the monologue seems out of place. A more interesting option would be to delve deeper in to the character of Nathaniel, who would soon become a noted psychotherapist, and would one day author his own influential and widely-read book. Tellingly, he titled it The Psychology of Self-Esteem.