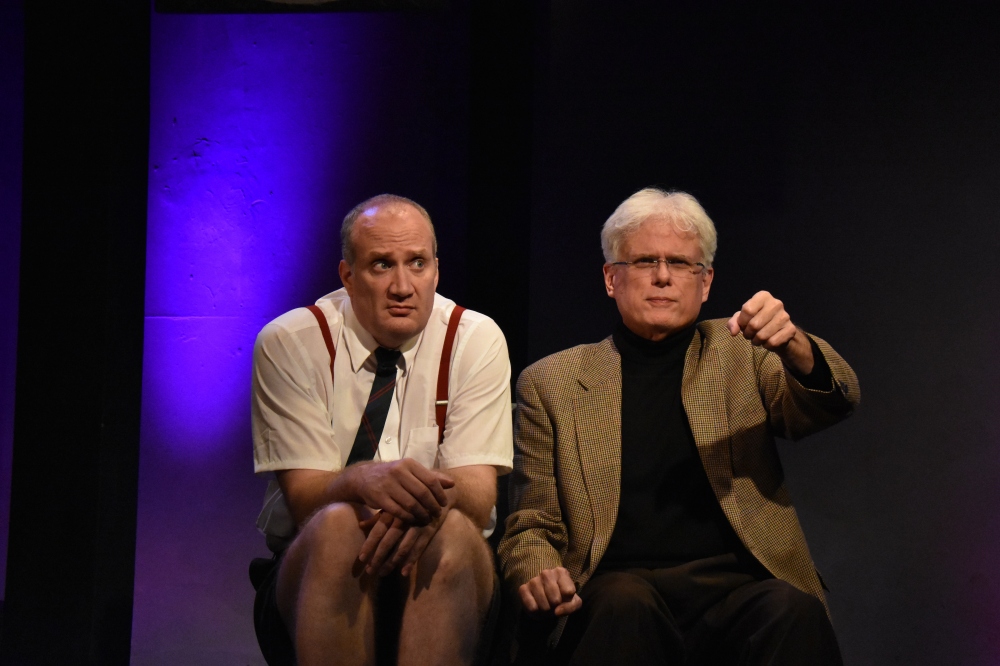 It would be hard to think of a more unlikely confluence of historical figures, and yet there’s evidence that Modernist playwright Samuel Beckett and pro wrestler Andre “The Giant” Rousimoff knew each other. In fact, they shared a good amount of time together when 12-year-old Andre, already too big to fit on the bus, hitched a ride to school in Beckett’s truck. Whether they stayed in touch is not known, but it’s not a stretch to imagine that they might have met up some years later in Paris, where several of Samuel’s plays debuted and Andre’s athletic career began. In this clever and oddly touching two hander, playwright Gino DiIorio imagines what might have occurred had such an encounter taken place.

The play begins in French countryside, where Samuel Beckett (Dave Sikula) has purchased property with the proceeds from his acclaimed play WAITING FOR GODOT. Local craftsman Boris Rousimoff helps him build a cottage, and when Samuel has difficulty paying for the work, he compensates Boris by giving his son Andre (Brendan Averett) a lift to school every morning.  Conversations are a bit stilted at first. But when the two guys discover their shared love of cricket, the mood becomes more relaxed. Beckett being Beckett, he’s not always able to give Andre (“Dede” for short) the cogent answers his young mind craves. Yet the closeness between them gradually grows, and Dede opens up about the social awkwardness caused by his stature and about his desire to escape small town life and travel to the City of Lights.

As it happens, Dede gets his wish. At the French premier of Beckett’s ENDGAME, the two men reunite, and Sam is pleased to learn that Dede is working in Paris as a furniture mover and gaining a reputation in the wrestling world. Dede is impressed with the performance but bemused by his friend’s seeming inability to enjoy his growing success. When they meet again, things have changed, and yet the affection between the two men remains undiminished. It’s now 1975.  Beckett is required reading in colleges everywhere, and Andre’s a World Wrestling Federation star. The two share some laughs and down several bottles of wine (Andre has become an epic drinker). Andre tells wild anecdotes and teaches Sam the tricks of the wrestling trade. Amid the laughter, though, somber truths emerge. The same pituitary condition that makes Dede a giant also affects his circulatory system, and he knows his own end game is not far off. Sam, too, admits that he has looked death in the face. As if in an existentialist novel, he was stabbed on the streets of Paris by a pimp who, by his own admission, had no reason for his actions. As the evening progresses, Dede, the master of stadium theatrics, and Sam, who wrestles with life’s great intangibles, find they have more in common than meets the eye.

In lesser hands, this juxtaposition of high and low culture would be played for easy laughs. Thankfully, DiIorio isn’t content to merely flatter the audience with inside jokes for the Beckett-literate. The comedy here is of a gentler sort, deriving from the struggle of two men, each with a good heart, to navigate a modern world that often refuses to make sense. Averett maintains the same ingenuous verve as he transitions from an awkwardly outsized child to a Rabelaisian roisterer. Sikula captures virile intellect and quizzical melancholy beneath Sam’s cordial demeanor. Using minimal strokes, director Leah S. Abrams neatly establishes the physical world of the play, and gently puts across the message that, for all its concomitant frustrations and unsolvable riddles, being human does have its upside.

Despite the likability of its characters, Noah Mease’s glimpse of twenty-something life doesn’t pack enough energy to justify its running time. The fault lies not with the show’s premise: some very good scripts eschewed plot in favor of philosophical discourse. There’s a difference, though, between the art of conversation and mere gab. If this is meant to be a millennial answer to My Dinner With Andre, it falls wide of its target.

Fanboy Michael (Will Sarratt), attaches almost religious significance to the Omega Kids series of comic books (something akin to the X-Men and Justice League). He talks of little else as he pays a visit to a colleague, also named Michael (Fernando Gonzalez) at the latter’s apartment in Boston. It’s a rainy night, and At Home Michael encourages Visitor Michael to stay the night rather than brave the weather. Thus begins what amounts to a sleepover, during which the two young men pass the time chatting, and doing little else. There is some sexual tension under the goofy grins and small talk, but it dissipates as Visitor Michael reveals that neither men nor women seem to have any effect on his libido (Unfortunately, he doesn’t elaborate on this, and audiences interested in the experiences of people who identify as asexual will have to look elsewhere). At Home Michael shares a few details about his bisexuality and a difficult childhood spent in group homes and foster families, sometimes with abusive guardians. The point seems to be that he is able to let his down with Visitor Michael. Yet the divulgences don’t seem to bring about any catharsis, and the two guys, rather than growing closer, soon drift off to other, more mundane topics.  The script gets a bit more compelling when Mease takes a more Shavian approach, allowing both Michaels to advance a social argument. Visitor Michael likes the new diversity that permeates contemporary comics culture. At Home Michael is not impressed with what he sees as the token inclusion of a few gay couples and people of color in a medium traditionally dominated by super-white, super-straight male protagonists. Sadly, there are few such beats in OMEGA KIDS’ 90 minutes of colloquy, and we learn little about how the young see the world they’ve inherited.

Director Jay Stull gives his cast few props to work with or activities to focus on, so the actors spend most of the evening exploring myriad variations on the actions of sitting cross legged or reclining on a shag carpet. Sarratt and Gonzalez seem relaxed and natural, and they are appealing to watch for a while. But their talents would be put to better use in a leaner, more purposeful production. Trimmed to a fighting weight, OMEGA KIDS might make a charming one act. At its current length, its packs more superfluity than superpower. 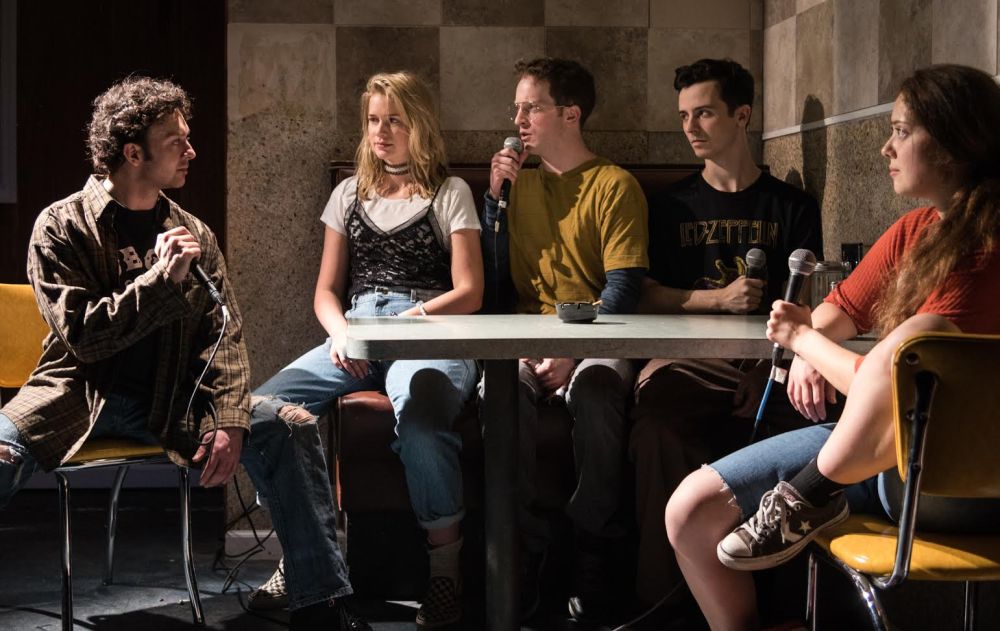 A kind of Gen X spin on Invasion of the Body Snatchers, Ken Urban’s teen dramedy looks at what happens when the comforting routines of high school begin to crumble under the pressures of adulthood.

It’s the summer of 1992, and everything 80’s is on its last legs. The cold war between the U.S. and the Soviet Union is over, and Bill Clinton is poised to end a twelve year run of Republican leadership. Nirvana and Pearl Jam haven’t yet transformed pop radio, and Morissey and Depeche Mode are still the patron saints of adolescent angst. At least that’s how it is in Medford, New Jersey, where Adam (James Kautz), is doing his slacker thing. There’s not much to do in this suburban wasteland, but at least Adam has a tight group of fellow misfits to help him pass the time. Matt (Spencer Davis Milford), tries to act confident although his hot girlfriend Hayley (Elizabeth Lail), can see that he lacks experience. Tara (Rachel Franco) keeps throwing herself at Matt and his best bud Pete (Sean Patrick Monahan), but they only see her as a friend. Desperate to cross the sexual border into adulthood, Tara stumbles into an affair with Dan (Matthew Lawler), an older, married cop who grew up in Medford and never left. All these little episodes fairly  typical of small town society, but soon life in Medford begins to look less like an indie drama and more like an alien invasion B movie. Late at night, a green, multi-limbed extraterrestrial called the Nibbler (presumably named for arcade game of the same name), injects its unsuspecting victims with a mysterious venom that alters their personalities. One by one, Adam’s friends become unrecognizable. Matt, eschewing the fashionable political apathy of the day, morphs into a racist, homophobic right-winger. Tara takes the opposite stance, donning slogan-laden clothes and volunteering for the Clinton campaign. Pete sports  a lavender tee shirt and comes out about being gay. They all start moving away to college, doing something with their lives, leaving the ambition-less Adam without his old support system. The party’s over, and Adam finds himself facing a daunting choice: find some sense purpose in life, or end up like Dan in 20 years.

The cast rises nimbly to the challenge of the script, making the characters’ identity transitions both comical and convincing. Director Benjamin Kamine, aided by the show’s impressive production values, weaves the mundane and surreal elements of the story into a motley tribute to the quirky culture of 90’s.The script, likes its protagonist, is both endearing and a bit unfocused. The most affecting beats deal with the real (not alien-induced) maturation process, as young adults discover the messiness and ambiguity of actual human relationships. The fleeting tenderness between Tara and Dan, for example, is handled with disarming delicacy, as is the pained awkwardness of Pete’s unspoken desire for the clueless Adam. Other scenes are less theatrically engaging, especially the ones that center on the unnibbled Adam. We learn that he is in a band, and that he is worried he may have gotten someone pregnant. Yet, for some reason, all these events happen offstage and don’t seem to influence the course of the story. If Adam could be less of a “lens character” and more of a three-dimensional person with real problems and dreams, NIBBLER would have more of the bite it needs.