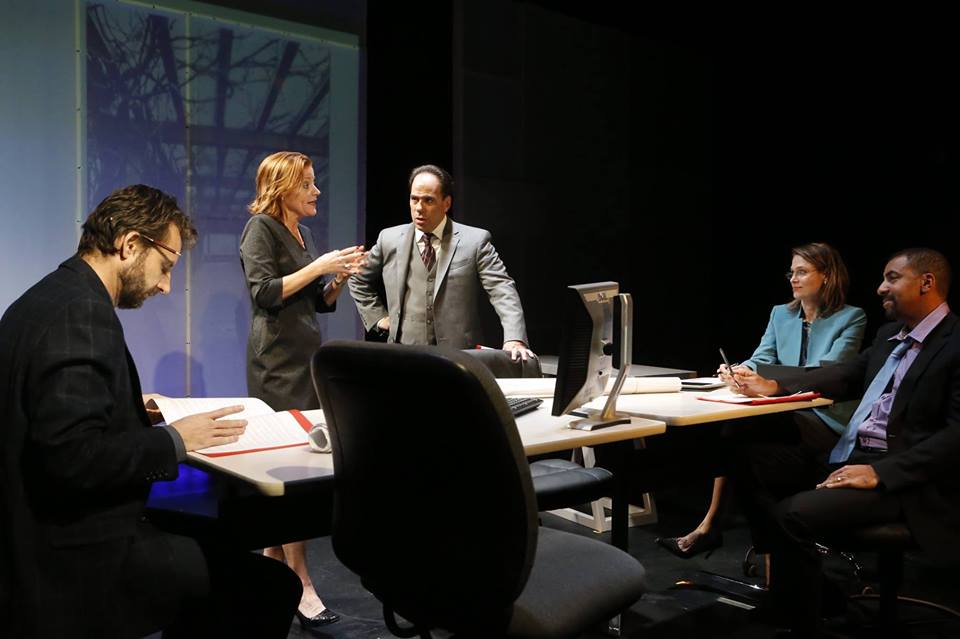 It would be comforting to be able to say that playwright Theresa Rebeck is going too far in her biting depiction of gender bias in the workplace. Sadly, much of the grotesquery that occurs in WHAT WE’RE UP AGAINST feels more like realism than caricature.  In her zeal to make a point, Rebeck sometimes overlooks dramatic possibilities, but the issues she raises are, perhaps now more than ever, worthy of our attention.

When Eliza (Lesley McBurney) takes a job at an architecture firm, she’s confronted with a Catch-22. The only way she can establish herself is by doing impressive work, and yet, because she’s new hire (and female) no one will give her any projects to do. It doesn’t help, of course, that her boss, Stu (Vince Bandille) is a cantankerous, alcoholic misogynist. When the frustration gets to Eliza, she takes matters into her own hands. Bringing one of her designs to Stu’s attention, she pretends it was done by her highly-regarded colleague Weber (Bones Rodriguez). Stu is impressed, but when Eliza reveals the ruse, he doesn’t respond by acknowledging that her work is better than Weber’s. Instead, he tries to save face by turning up the heat on Weber as well as  his teammates Ben (Ean Sheehy) and Janice (Cherie Mendez). Eliza is relegated to a less prestigious project. Naturally, Eliza does excellent work on her assignment. The other team flounders, and only Ben exhibits enough smarts to know that Eliza could solve their problems. Mindful of the office’s tense atmosphere, he attempts to reach out to her without seeming to circumvent the boss’s authority. Eliza is understandably slow to trust Ben, but he’s the only ally she’s got. Certainly there’s no sisterly feeling between her and Janice, who sees her as a threat. Friction intensifies as Stu and his loyalists attempt to derail Eliza’s efforts, all the while underestimating her skill at counter-sabotage.

It’s easy to root for Eliza, considering how tough it is for her to get the break she deserves. Theatrically, though, the play could benefit from a more Shavian, less lopsided approach. Janice’s arguments with Eliza, for example, would have more power if she were shown to have at least one decent architectural idea. The Janices of the world, the women who collude with their male higher-ups and undermine their female colleagues, aren’t always airheads. Very often they have talent and drive, which they feel will go unrecognized unless they play the game. A more intriguing conflict occurs when Ben attempts to sort out the situation. Like many men today, he doesn’t share Stu’s old school chauvinism but doesn’t know how to go about changing the system. Despite some missed opportunities, though, WHAT WE’RE UP AGAINST is tight and well-paced, and Rebeck exhibits an expert ear for hollow boardroom jargon. Her staccato dialogue is jazzily handled by a bright ensemble under the confident direction of Lorca Peress. Jennifer Varbalow’s architectonic set and Jason Fok’s cold lighting design suggest a soulless corporate maze in which it’s easy to make a wrong turn.

WHAT WE’RE UP AGAINST ran for one week at the June Havoc Theater, 312 West 36th Street, New York, New York. For information on upcoming shows check here: https://www.facebook.com/WhatWereUpAgainst/ 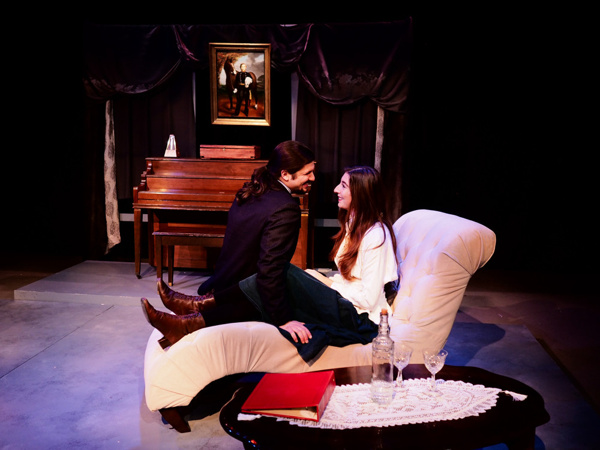 Adapted and directed by Kelly McCready

In 1879, playwright Henrik Ibsen shook European society out of its complacency with his naturalistic drama A DOLL’S HOUSE. Its final scene, in which the protagonist abandons her comfortable bourgeois life for an uncertain future, ran against the entrenched family values of the day. A decade later, Ibsen took a more scathing look at domestic asphyxiation. Out of step with society’s norms, the wild-hearted anti-heroine of HEDDA GABLER feels she can only express her ambitions through the men in her life. When her manipulations backfire, Hedda’s world grows ever narrower, eventually driving her to despair. In this new edition, adapter-director Kelly McCready has trimmed away some of Ibsen’s clunky exposition but kept the bones of the plot intact. The result is a briskly-paced, enjoyable spin on the classic text. The production suffers from a few inconsistencies, but its flaws are outweighed by the sensitive and energetic work of its talented cast.

After returning from a honeymoon, bookish George Tesman (David De Almo), plans to embark on a distinguished academic career. His bride, Hedda (Kaitlyn Schirard), once turned heads with her beauty and penchant for riding fast horses and playing with guns. Now, it appears, she is ready to settle down. Already there’s tension in the house, as Hedda doesn’t adapt easy to the role of professor’s wife. And when Hedda’s ex-friend Thea Elvsted (Maya Carter) arrives, things get even more complicated. Mrs. Elvsted’s lover is Tesman’s old schoolmate Eilert Lovborg (Lebron Lackey), with whom Hedda onCe had a mad romantic encounter. There is still an erotic chemistry between them, which threatens to ignite whenever they are alone together. Furthermore, Lovborg’s genius outweighs Tesman’s accomplishments. The position for which George was being groomed may go to Lovborg instead. All this puts pressure on Thea, who has spent months weaning Eilert off booze, and worries that all the excitement will derail his hard-won sobriety. Hedda is only too happy to nudge him off the wagon, and the resulting tailspin consumes the lives of all concerned. Meanwhile, the lecherous Judge Brack (Glenn Stoops) has been circling like a vulture, waiting for Hedda to make a misstep. Skilled in the art of blackmail (or Brack-mail, as it were), he takes away Hedda’s last hope for a livable future.

McCready’s compassionate direction highlights the yin and yang of Ibsen’s complex characters. Hedda is both victim and villainess, Lovborg and Tesman close friends as well as bitter rivals. Anchored by Schirard’s nuanced, fiery Hedda, the ensemble captures the anxious rhythms and the (often neglected) dark humor that distinguishes HEDDA GABLER from Ibsen’s more hortatory pieces. The director’s program notes state the production came together quickly, and indeed the cues aren’t always as crisply timed and confidently executed as they would be with a longer rehearsal period. Something should also be done about the set’s floorboards, which amplify the actors’ footsteps in a distracting way. Despite its rough edges, though, the production overall succeeds, and bodes well for the future of the fledgLing Ophelia Theatre Group.

Hedda Gabler plays at The Ophelia Theater, 21-12 30th Road, through November 19, 2016. The running time is 80 minutes with no intermission. Performances are Fridays and Saturdays at 8; and Sundays at 3. Tickets are $18 (Sunday matinees are Pay What You Can) and are available at Brown Paper Tickets. For more information visit opheliatheatre.com.)