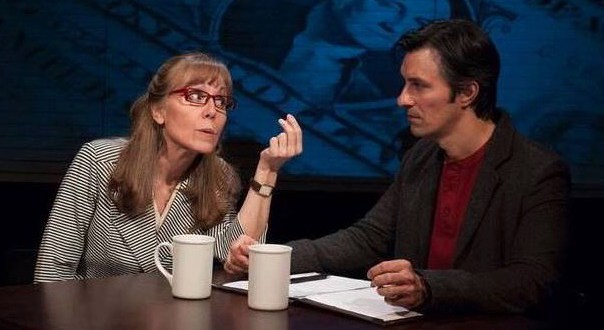 If the recent rash of election-year buffoonery has battered your faith in the future of political discourse, fear not. There is a readily available antidote to debate fatigue. Turn off the television and look to America’s most reliable purveyor of intelligent dialogue: the theater. Culled from dozens of interviews, Rich Orloff’s well-researched take on the battle for the national soul is well-researched, audaciously hopeful, and surprisingly entertaining.

Entrenched in the East Coast liberal culture, Orloff (Jeffrey C. Wolf) finds himself puzzled by reports of the rising political phenomenon known as the Tea Party. His friends, in typically dyspeptic New York style, revile these right wingers, even going as far as to refer to them as Nazis. But Orloff suspects his left-leaning cohorts may be too mired in their own  prejudices to see things clearly. Who are the Tea Party really? What do they stand for? Determined to find out for himself, Orloff embarks on a cross-country odyssey. As it turns out, many of the preconceived notions about Tea Partiers are, indeed, invalid. Of the many party members who are willing to talk with Orloff, few are crackpots and almost none are racist (the notable exception, ironically, being the Bronx chapter). Most of them are bootstrap types who have earned rather than inherited whatever modest wealth they possess, and therefore believe in individual liberty over government intervention. The conversations are limited to politics, but what little Orloff sees of the partier’s personal lives impresses him. They speak respectfully of their spouses and appear to be loving and attentive parents to their well-behaved kids. Their arguments don’t persuade the playwright to alter his liberal positions on guns, healthcare and other key issues, but he comes to admire their sense of citizenship. They don’t sit around with a remote control in one hand and a beer in the other, complaining that things aren’t right. They get off the couch and organize. And in the age of massive national debt and Washington gridlock, who can blame them for craving lower taxes and a downsized central government?

Director Lynnette Barkley keeps the show moving briskly and makes economical use of slide projections and lighting changes to suggest myriad locales.Aided by dialect coach Page Clements, the ensemble (John E. Brady, Maribeth Graham, and Richard Kent Green), morph into a rich array of concerned Americans, each with a kind of poetry in the cadences of their speech. As the restlessly  inquisitive Orloff, Wolf radiates warmth and intelligence, never arrogant or abrasive even when quoting damning statistics or asking tough questions. At times comic, often moving, CHATTING WITH THE TEA PARTY offers no solutions. But it does affirm that it is not only possible but necessary, to reach across the aisle and find common ground. If our politicians won’t do it, then we ,the people must make the first move. 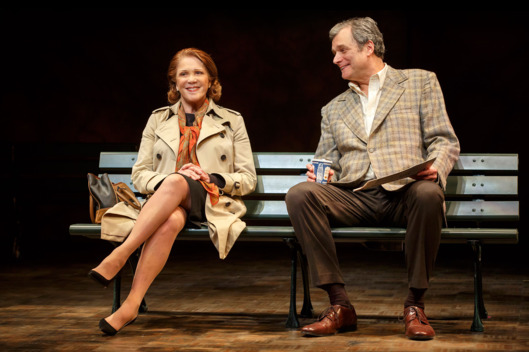 Although it’s couple of drafts away from realizing its full potential, Richard Greenberg’s take on end-of-life issues offers a refreshing lightness and honesty. It also sports a meaty part for the estimable Linda Lavin, who, of course, makes the most of the opportunity.

New York obituarist Seth (Greg Keller), has a common middle-age problem. His mother Anna (Lavin), is unwell. Having lost their father a few years back, Seth and his California-based sister Abby (Kate Arrington) are responsible for making sure Anna is taken care of. There’s the usual Rashomon of long-past events remembered differently by Seth and Anna, but for the most part mother and son get along. As the kids sort out Anna’s belongings, though, they discover that she has a provocative secret. Using a private post office box, she secretly, she received torrid (if hardly eloquent) letters from a mysterious paramour known only as “Phil” (John Procaccino).  The extramarital affair was short-lived but, judging from the content of the letters, clearly passionate. It’s not so hard for the kids to believe their mother might seek a respite from her dull marriage to kvetchy Abe (Procaccino).  But who was Phil really? As we learn through a series of flashbacks, Anna’s lover is none other than David Greenglass, the treacherous brother of Ethel Rosenberg. In the milieu of the New York, Jewish mid-century left, Greenglass is reviled as a collaborator with evil.  Back in 1951, he cravenly saved himself and his wife by giving testimony that sent Ethel and her husband Julius to the electric chair.  It would be difficult, if not impossible, for anyone to fact-check Anna’s story. After the trial Greenglass lived in Queens under an assumed name. Even his death went unreported by the press until three months after the fact. So, in a way, he’s tailor-made for the delusion/ruse that Anna’s mind had constructed: better to be a footnote to history than die an ordinary person whose brief hour upon the stage doesn’t merit an obituary.

Under Lynne Meadow’s smartly understated direction, the actors paint a convincing portrait of a family facing down a conundrum. Will the truth –if it is knowable at all- really set the family free? Or, are we all, in the end, responsible for the narrative of our own lives, riddled with half-truths as it may be? The performance reaches its peak of poignancy when Anna and Phil, both in desperate need of acceptance, share guilty secrets they could never divulge to their own families. Whether real or imagined, this revelation forces Seth and Abby to see their mother in a new light. Despite the commitment of the cast, though, the evening feels lopsided. Anna and Phil’s relationship gets plenty of time at center stage. But her children’s lives remain off stage. We learn that Seth is gay, but not why he has chosen to withdraw from the dating scene. Abby talks about wanting out of her same-sex relationship, but the conflict is never actually shown. It would be interesting to see firsthand how Anna and Abe’s parenting has shaped Abby and Seth’s adult behavior, and to further explore (as in Tamara Jenkins’s screenplay for The Savages, for example), how the sibling dynamic changes with the passing of the parents. Greenberg endows his characters with an engaging intelligence and originality, but he could get even more out of them if he would find more spots in the script where ideas could be conveyed through dramatic action rather than commentary.