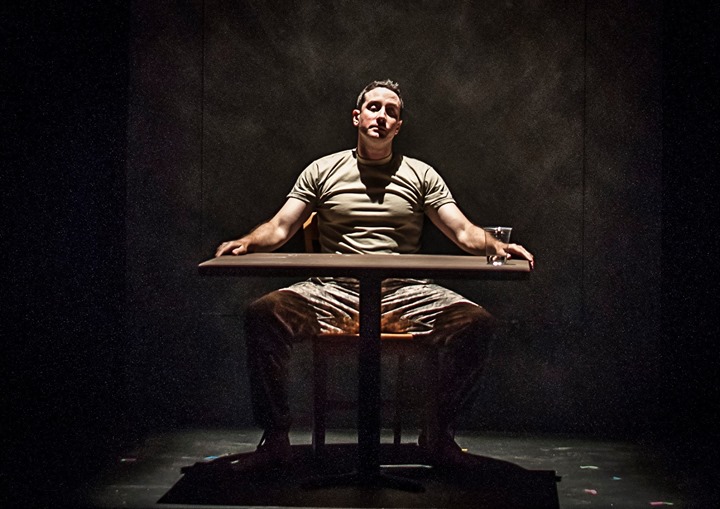 Brewed at the at the St. Louis Actor’s Studio, the LNTF is now bringing the best of its one act entries to East Coast. The selections, culled from some hundreds of cold submissions, range in tone from whimsical to disquieting. But they all reflect the rawness, wit and theatrical ingenuity that exemplifies the LaBute aesthetic.

STAND UP FOR ONESELF centers on a chance encounter at a London house party. Afflicted with a wasting disease, Lucas (Mark Ryan Anderson) doesn’t see himself as catnip to the opposite sex. Winsome Lila (Alicia Smith) begs to differ, but getting past Lucas’s cynical veneer will take persistence and ingenuity. Playwright Lexi Wolfe could stand to put her characters through a bit more strife before they reach their resolution. But her take on the male-female dynamic is a refreshing one. Lucas and Lila are on an equal footing, neither one more valid than the other. Anderson and Smith handle their UK accents well and share an appealing chemistry.

On a similar theme, Nancy Bell and Peter Grandbois’ PRESENT TENSE looks at the challenges of intimacy in the digital age. Though they seem to be meeting for an illicit tryst in a hotel room, two lovers (Justin Ivan Brown and Jenny Smith) are actually miles apart.  The two engage in some hot verbal exchanges, but the minute they get too physically close, they jump back and turn their attention to their electronic devices. They’re “connected” through the internet, but face-to-face communication is a skill that has atrophied from disuse. Brown and Smith are tenderly comic as they slowly find the courage to take a few baby steps back into the real world.

Another troubled couple drives the show’s funniest entry, THE COMEBACK SPECIAL by JJ Strong. On a cross road trip, Jesse (Michael Hogan) reluctantly visits Graceland with his girlfriend Bonnie (Alicia Smith). A music snob, Jesse  cares nothing for the “derivative” music of Elvis Presley, and wants to make haste to jazz-centric New Orleans. But Bonnie, who lives in the moment, wants to savor the historic kitsch of the Presley mansion. Their argument is about to reach a stalemate, when out of the restroom comes the King himself (Neil Magnuson). Is he really an undead Elvis? Or just a crazed impersonator who lives in the bathroom? Whatever he may be, the sequined apparition needs something from the young couple, and Jesse finally opens his suspicious mind to new musical and emotional possibilities. Magnuson’s marvelously accurate impersonation is balanced by Hogan and Smith’s deadpan reactions, and enhanced by Carla Evans’s colorful costume design.

John Doble’s COFFEE HOUSE, GREENWICH VILLAGE, offers a more macabre take on relationship dynamics. Jack (Brown), and Pamela (Jenny Smith) are on a blind date. In between interruptions from an obnoxious waiter (Anderson), they struggle to find common ground. As layers of inhibition fall away, it turns out Jack and Pamela do have a shared interest– one that may land them in a federal prison. The premise is a provocative one, but the tone isn’t quite right for the material. The opening beats are directed in a farcical key, which ultimately makes the play’s twist ending harder to believe. A more realistic, unaffected approach would have pulled the audience along more effectively.

In contrast to the relationship-driven vignettes, G.D. Kimble and Neil Labute deliver weighty examinations of political violence. Kimble’s TWO IRISHMEN ARE DIGGING A DITCH takes place in Northern Ireland, where the ghosts of The Troubles refuse to stay buried despite all the recent peace accords. In a darkened cell, a naked, badly beaten prisoner (Anderson) laughs madly as he faces a panel of unseen judges. Accused of collaborating with the IRA, the young man protests that all he did was have a few of the old-timers over to his house and let them tell their war stories. Yet his interrogators show him no mercy. In the next scene, what appears to be a casual encounter between two other neighborhood men (Magnuson and Brown), turns out to have a darker purpose. When a life is taken, the other side retaliates, and the blood feud continues. Without preaching, Kimble’s unflinching drama offers a bracingly human portrait of the impact of war on everyday lives.

An extended monologue, LaBute’s KANDAHAR also features a character on trial, facing the audience as if we were his accusers. A young G.I. (Hogan) slowly recounts the actions that may cost him his life. Without overselling the paradox, LaBute explores society’s double standard. When the young man slaughters Afghans, he is considered a war hero, but when he turns his violent instincts on his fellow soldiers and his unfaithful wife, he’s reviled as a murderer. Hogan is frighteningly convincing as the plainspoken perpetrator who unaffectedly unpacks the details of the carnage he has caused and the thoughts that ran through his head as he did so. LaBute exhibits his customary economy of form, using a theatrically simple palette to paint a complex, haunting picture of a disjointed world.