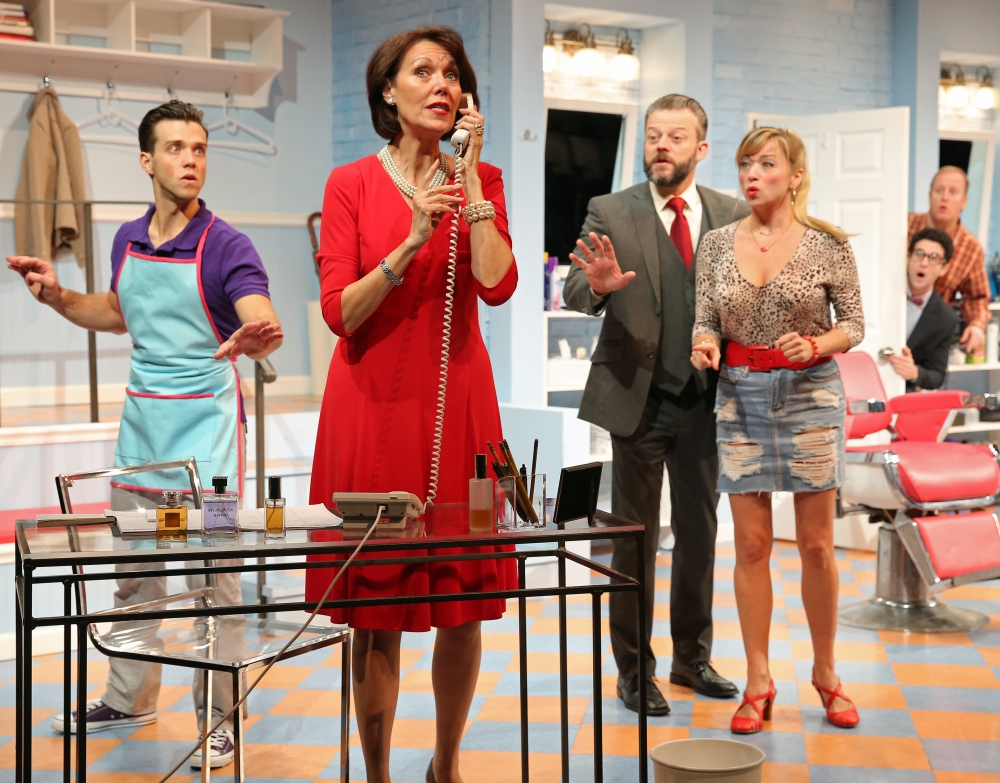 Adapted from the play by Paul Pörtner

After more than 30 years of successful runs in Boston, Chicago and many other burgs worldwide, this interactive whodunit has finally made its New York debut. Like any newly arrived out-of-towner, the show hasn’t yet fully adapted to Manhattan’s rhythms and sensibilities. It does, however, feature a cast of charming and improv-savvy actors, and with some tuning-up, SHEAR MADNESS has the potential to do well in Gotham.

The play opens with a bit of well-played silent comedy. Shaving cream, shampoo, scissors and other inanimate objects take on a life of their own as tawdry Barbara Demarco (Kate Middleton) and flamboyant Tony Whitcomb (Jordan Ahnquist), go through the motions of a typical day in the Shear Madness hair salon. Unbeknownst to the hairdressers, customers Mike (Adam Gerber) and Nick (Patrick Noonan), are actually undercover cops investigating a blackmail case. The upstairs neighbor, a once-renowned concert pianist with plenty of money, has received threatening letters. And when she turns up dead, Mike and Nick need some questions answered. Barbara and Tony are, of course,  persons of interest. So are two mysterious clients, sharply-dressed Eddie (Jeremy Kushnier), and Park Avenue patrician Mrs. Shubert (Lynne Wintersteller). Like a Brooklyn edition of Hercule Poirot, Nick instructs the suspects not to go anywhere. He then breaks the fourth wall and turns the audience into eyewitnesses. Who was absent from the shop when the murder took place? Did anyone see anything suspicious? Of course, clues have been planted all throughout the proceedings, and viewers recall seeing Barbara kissing Eddie, Mrs. Shubert making a cryptic phone call, etc. Based on an audience vote, any one of the four potential culprits might turn out to be the real killer. The cast is ready with a motive and back story for each eventuality.

More than the murder mystery plot line, the comic tension created by the show’s unknown outcome gives the show its theatrical energy. Under Bruce Jordan’s thoroughgoing direction, the actors manage to stay solidly in-character while responding to the wild cards thrown at them by the audience. The resulting spontaneous comedic combustion is far more successful than the show’s scripted witticisms. Jordan and co-creator Marilyn Abrams take a kind of birdshot approach to comedy, peppering the audience with blasts of topical one-liners in the hopes that some of them will land. References to Kim Kardashian, the Spice Girls, and many other pop-culture figures are laced throughout the play, and while some of the material is clever, much of it feels passé. For SHEAR MADNESS to click with Manhattan ticket buyers, its script would benefit from some trimming, shaping and styling.