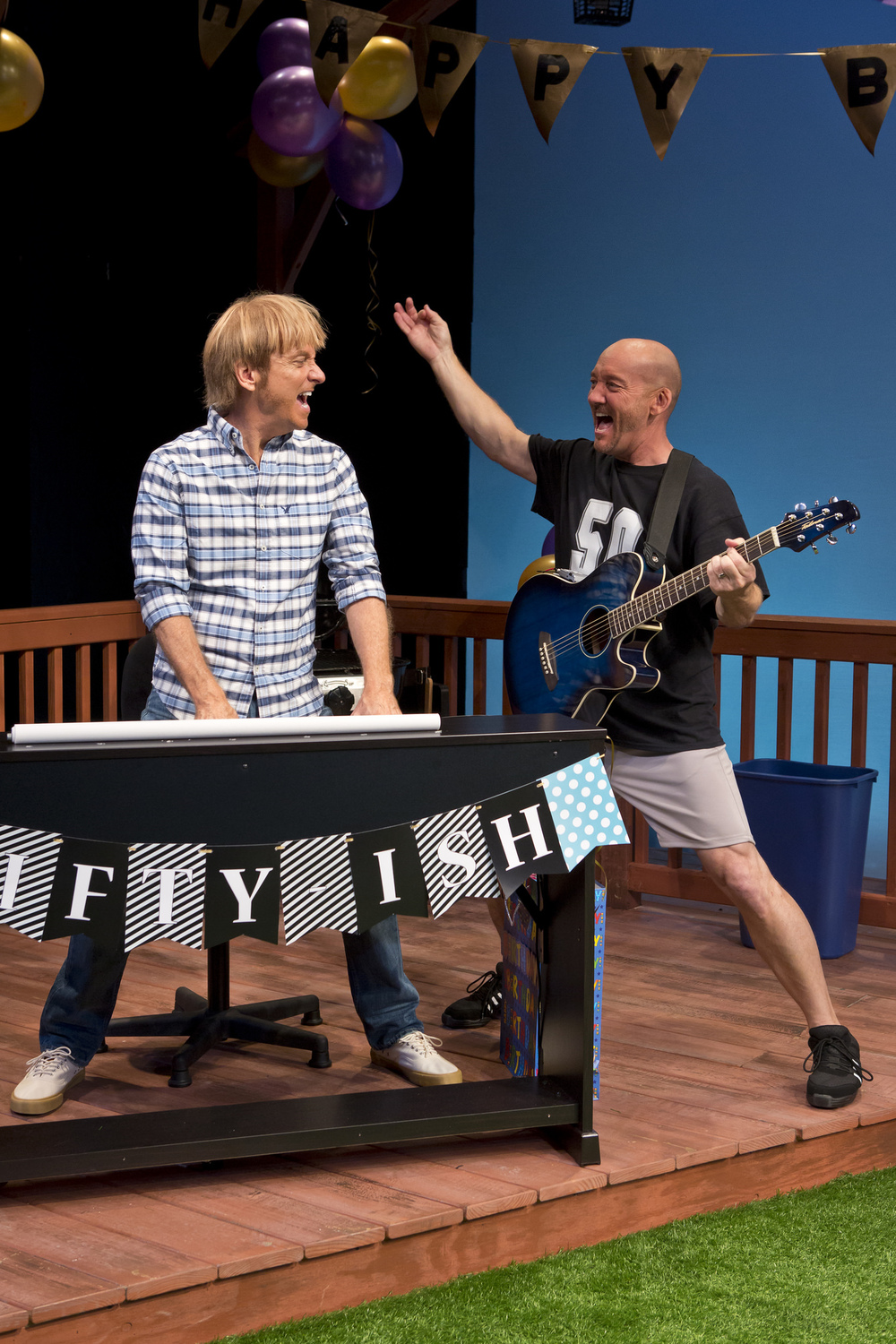 As Generation X hits the half-century mark, a rich vein of comedy material is being mined by theater folk of (ahem) a certain age. Smartly written and charmingly performed, HAPPY 50ISH sports a rich array of witty ditties on the topic of getting older. Thanks to an ingenious framing device, there’s also just enough of a storyline to raise the show to the level of a full evening of theater rather than a themed revue.

Mike (Mark Vogel) a cool musician who sports an even tan and a retro hairdo, sets up a keyboard and a bunch of balloons in his best bud’s backyard. It’s all part of a surprise party for his Bob (Lynn Shore), who is turning the big five-o. Bob’s wife Pam has orchestrated the whole affair, but because of a cake-related crisis, she’s stuck on the road. That leaves Mike and the audience (we become Bob’s surprise guests) to get the party started. Luckily, when Bob shows up he’s in festive, funny and creative frame of mind. And there’s plenty for him to play with onstage, including a giant stack of humorous birthday cards and a magical cooler containing a limitless supply of cold beer along with a cavalcade of colorful props.

With Mike providing musical accompaniment, the birthday boy launches into a series of comedy songs and skits on such pentagenarian concerns as Viagra, midlife cravings for sporty vehicles, sudden onslaughts of junk mail aimed at the old-dude demographic, and (although Bob hates the G word), the welcoming one’s children’s children into the world. It’s a predictable list of topics, but Vogel, Shore and collaborator David Burnham manage to keep the songs fresh, clever and often gut-bustingly funny. Shore goes at the material with indefatigable zest, combining a beguiling confidence with a self-deprecating comic persona. Vogel proves an apt foil, adding his own bits of drollery without upstaging his partner. In addition to the shtick, there’s just a touch of sentiment, deftly handled, as Bob meditates on father-son relationships.

The intermissionless evening is the right length for what is has to say, and director Paul Stancato smoothly navigates the shows’ real-time format (audience participation is, thankfully, kept to a tasteful minimum). Christopher Ash’s bright set encapsulates the mythic suburbia in which the Bobs, Pams and Mikes of the world keep on rocking as the decades roll by.