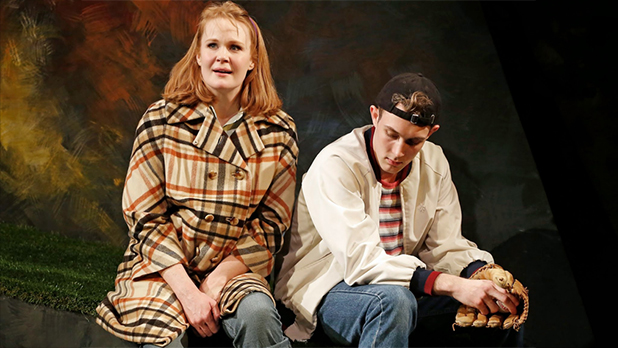 Prior to splashier Broadway ventures like THE ADDAMS FAMILY and BIG FISH, composer Andrew Lippa established his reputation by writing a more spare (and economical feasible) form of musical. Keen Company’s revival of this early Lippa effort, co-written lyricist-librettist Tom Greewald, tells a compelling story, but its tentative approach but songcraft keeps it from reaching its full potential.

Growing up in the 1950’s, Jen (Kate Baldwin) and John (Conor Ryan) weather the turbulence of life in a dysfunctional household by clinging to each other for support. Jen, alert to her father’s drinking and abusive behavior, seeks to escape. John, the younger of the two, needs to believe that everything’s alright- even when he ends up on the receiving end of Dad’s volatile temper. As they mature, John channels his feelings into athletic achievement, while Jen discovers boys. In the 1960’s Jen, now a college student in New York, questions authority and explores a hippy lifestyle. Crew-cutted John, still unable to see the flaws in either his family or his government, ships off to Vietnam. The once-close duo is now at odds. Tragically, they never get to a chance to heal the rift. In the second act, Jen’s life is focused on her son, John (Ryan), conceived during her wild Manhattan years. Remembering her brother’s passion for baseball, Jen becomes an overbearing Little League mom. Other forms of helicoptering follow, and teenage John struggles to find some breathing room. As with the original John and Jen, the tension reaches a boiling point. But this time, Jen has a chance to put things right– if she can let go of her baggage and move on.

Thanks to a remarkable book and strong performances by Ryan and Baldwin, cast, the show largely succeeds in meeting the challenges of the two-person format. The character’s arcs, compressed into brisk vignettes, are believable and the flawed, complicated characters are easy to root for even when they make disastrous decisions. Musically, though, the show is inconsistent. Very few of the songs are built around strong melodies and clear rhyme schemes. For much of the evening, one song bleeds and to another, and many of the numbers feel like sung dialogue with truncated musical underscoring. The result is that, JOHN & JEN, as a musical, is somewhat unsatisfying. A few standout songs, like the clever comedy song “Trouble With Men”, and the ballad “Every Goodbye Is Hello”, show that Greenwald and Lippa are capable of solid song-writing. It’s puzzling that they didn’t choose to pack the production with more of this memorable material. The show is manages to be moving and quirkily enjoyable despite these shortcomings. But it could be considerably more so with a sturdier score.